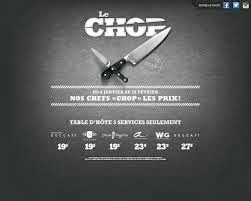 Since I had to work AGAIN, I had to give up my two invites for Le Chop media event a couple weeks back. Two friends went and this is what they had to say. (note: I was personally invited to visit all of the Tomnacos group's restaurants late last year. I visited Newtown, Decca 77 and L'Atelier d'Argentine. I thought this was going to be an evening where all the restaurants would be offering their succulent creations but alas, it was only G + A) 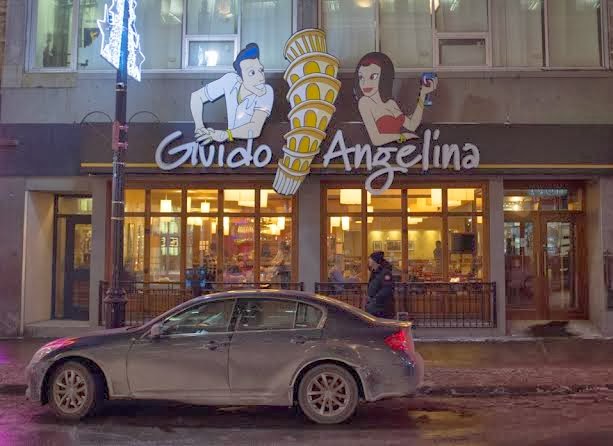 Two thirds of the way into my meal at Guido and Angelina’s, the manager approached the table and said “What, you don’t like the food”? My friend, who is brave, said “Nah, not really”.  I am not brave and said “well it’s a lot of food and I’m not that hungry.”  Both things were technically true.   To her credit, the manager crossed her arms and suggested that the kitchen could give it another shot.   As we could see the (over salted) light at the end of the (bland, crappy tasting) tunnel, we declined to reengage.  But you have to admire the effort.  So some solid marks for managerial effort are in order, assuming that managerial effort does not involve the tasting of any of the food at any time for any reason. 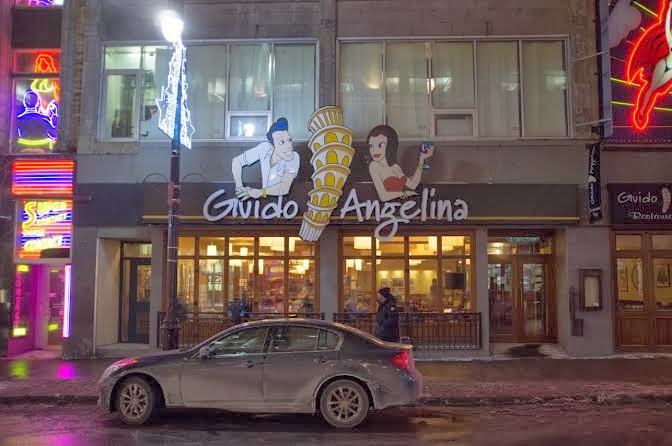 Guido and Angelina’s is a restaurant on St-Catherine’s that I had never been into before, nestled in between “super sex” and “other super sex”.  The logo features a cartoon Guido leering at a cartoon Angelina, and they are separated by a sort of bulging cartoon of the tower is pisa.  I’m not kidding.

So it’s not the kind of place I would venture into.  I work down the street and until I was invited, this place had been essentially invisible to me because it looks like a Boston Pizza.  Yeah, I’m probably a snob.  But I’m a snob who eats at McDonalds once a month.  So I went in with a mind as open as humanly possible, and the whole thing was terrible.  A  super bland when-will-eating-ever-be-fun-again sort of terrible.  My dining companion was hungry, and she couldn’t finish more than three bites of her main.  I was hungry, and I had to fill up on dessert.  Everything tasted - and I know this is not how you can really describe a taste - watery.  As in a sensation diluted to the point of nothingness, with a dash of savoury and presumably a ton of empty calories.

Enough preamble. Let’s get into it.  Here’s what we had, according to the menu:
Bread (with hidden surprise).
Chef Salad
All three available appetizers, including:
Fennel, mandarin and cherry tomatoe [ this is how they spell tomato]  salad
Hearts of palm and artichoke spread on garlic crostini
Pesto and sundried tomatoe orzo salad
Veal Picatta, which was pan seared with butter, sage, cippolini onions, grainy mustard, demi-glace of madera and sundried tomatoes, served with a rice duo and roasted vegetables.
Cavatelli Classique - Saute of shrimp, merguez sausage, julliened vegetables in a garlic, white wine, fresh basil and tomatoe sauce.
Dessert of the day - coffee cake and a brownie 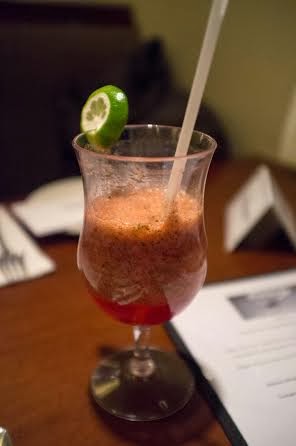 We were having the table d'hote, which came with your choice of house wine, beer, or a cocktail.  The staff heartily recommended the house special, the “Angelina”, and we both ordered one.  Turns out that it was made with Tequila, Fresh Puree (no mention of what was freshly pureed) and Fresh Basil.  As far as cocktails go, it wasn’t that bad - lots of basil.  It was sugary but refreshing.  Plus it was served in a convenient plastic cup. 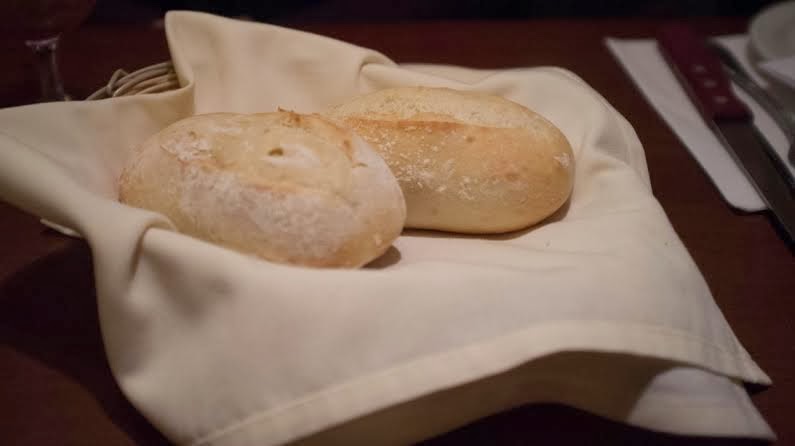 The bread was white bread with a ton of flour sprinkled on the top.  After the second bite we realized we had no butter.  Now at this stage, a normal customer would ask for butter, and they would get the butter and everything would be fine.  My companion and I were trying really hard to be food writers, because we were filling in for Marie, who blogs about food often and probably adheres to a set of ethical standards common amongst the food blogging community, and this made us both feel that as food-blogger-stand-ins we could not ask for butter.   We had to take this entire meal simply as it came.  We had to evaluate it on the merits of a service unblemished by requests or questions.  I know this seems stupid, but it is honestly what we were thinking.

After some weighing of pretty narrow pros and cons, we decided on our dishes and lodged our order with the nice waiter.  The timeline here is sketchy, but doubtless we were still sitting there dryly chewing bread because the waiter returned and indicated to us that the butter was under the cloth at the bottom of the bread basket.
I buttered my bread but elected to just stop eating it, and mercifully our appetizers arrived.  Here are my notes that I made as we ate our way the platters:
- Doughy bread.  Undercooked.  Semi baked frozen bread freshly reheated.  No butter available [see above]. 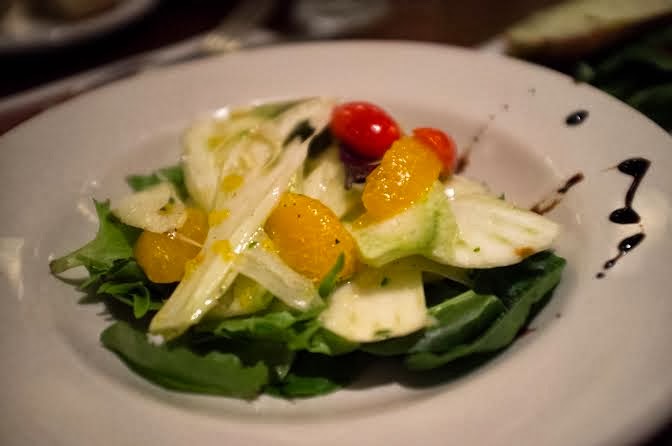 - Fennel salad.  Bit oily but refreshing. The balsamic not carefully dropped [see picture.  I think when I wrote “dropped” I meant “drizzled”]. 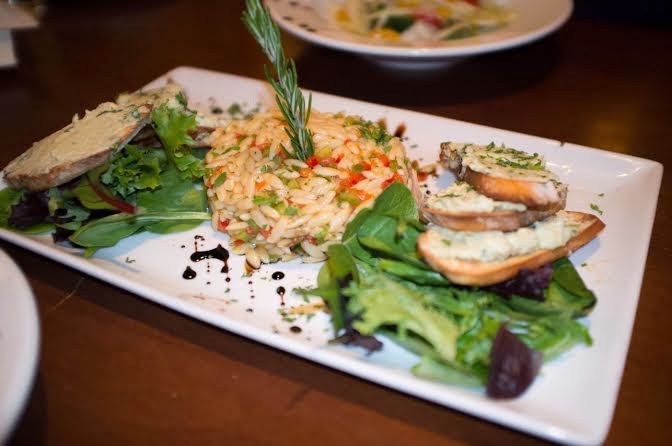 - Crostini is best.  Orzo is pass.  Tastes like a falling apart pizza.
So all in all, appetizers were pretty bad. The fennel salad was okay, but only marginally better than just eating fennel by itself.  The artichoke spread on the crostini was not too shabs.  It was a spread, and it’s hard to mess up a  spread. 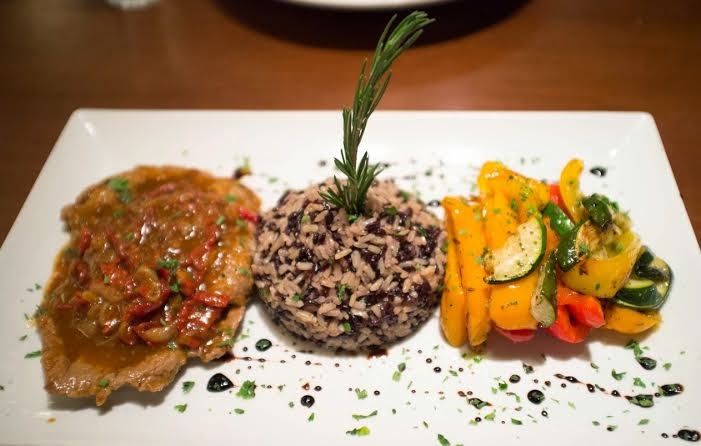 On to the mains -  the veal and the cavatelli.
Let me remind you how the the menu describe the veal picatta. “Veal Picatta, pan seared with butter, sage, cippolini onions, grainy mustard, demi-glace of madera and sundried tomatoes, served with a rice duo and roasted vegetables”.  All that stuff that the veal is pan seared with sounds great, right?  Not being an onion man, I googled cippolini onions and man did they look tasty - thekitchn.com claims that  “you haven’t had caramelized onions until you’ve made them with cippolini onions”. Intriguing. Possibly delicious.
It wasn’t delicious.  At all.  It was bad, bad news.  The sun-dried tomatoes dominated the veal and added a whole schmack of savoury to an already over-salted dish.  The veal was kind of mushy - now granted, I don’t know what great veal is really supposed to taste like, but I think that no matter what your level of veal expertise, one should enjoy the sensation of putting the veal in one’s mouth, no?  Did not enjoy. Did not enjoy.
So the veal wasn’t great.  How was the rice?  The rice was unfinished.  I don’t mean that we didn’t finish it - which we didn’t - but that whoever was cooking the rice just hadn’t finished cooking it.  I thought my pallete was going cray-cray until my buddy confirmed that yup, the rice wasn’t done.  Blech.
At least the veal and the rice looked sort of ok.  The vegetables, however, appeared to be leathery and pretty close to expired.  A quick taste confirmed that yes, indeed, said veggies were leathery and were likely no longer “best”. 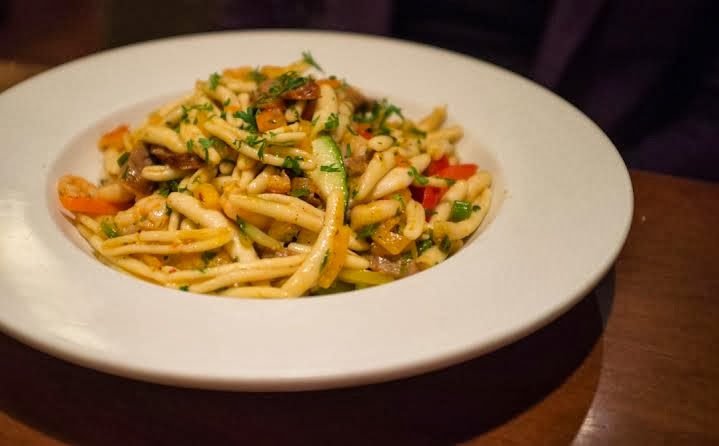 As for the Cavatelli Classique, my buddy had about five bites and had to stop, after which I had one bite out of journalistic duty.  I’m sad to report that the trend continued.   It went into my mouth and it made this noise when it was in there - “splech”.  I don’t really remember what all the ingredients tasted like, to be honest, because I had the one bite and it was so bland that I just stopped.  I don’t think I got any of the sausage, for example.  So the sausage part of it might secretly be great. I honestly have no idea. 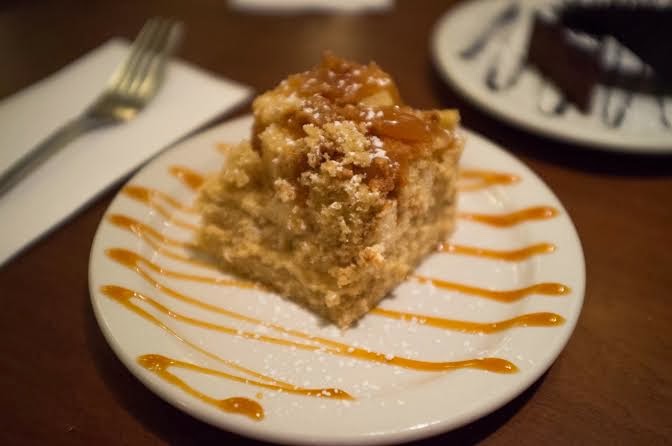 There was one bright spot. The coffee cake was pretty good.  We ordered two deserts, and boy did I like that coffee cake.  The whole meal had been so bad up to this point that this statement could be relativistically skewed, but that’s a whole discussion about how taste profiles escalate throughout a meal that is beyond the scope of this review. 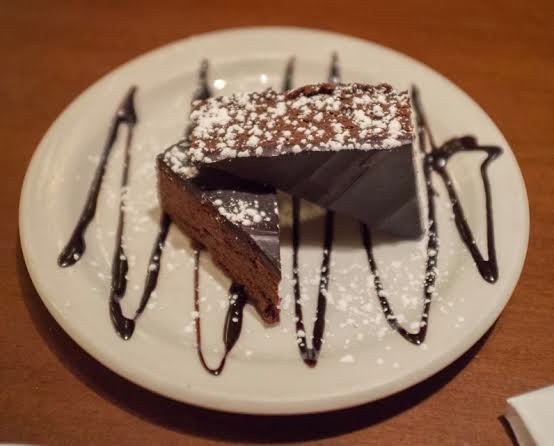 The service from the waiter was actually pretty good.  I’ve had much worse service basically everywhere in Montreal.  He refilled our water glass and was generally affable and smiley.  Just a nice guy, you know?  Plus he helped us with the butter.

So, the food sucks.  Sucks.  We emerged not wanting to eat again.  Not because we were satiated, but because the experience of putting all of that terrible, terrible stuff into our mouths had convinced both us of that doing it again in any way shape or form was a bad idea.  We were suffering from something like a taste hangover, I think.

As per Marie’s scoring system, here’s how Guido + Angelina’s stacks up:

This place should appeal to broke students, because the one thing G+A’s legitimately has going for it is an absolutely kick-ass calorie-to-dollar ratio.  You get a lot of food.  Not great food, but it is a lot of food.  We couldn’t finish a single thing.  We couldn’t finish the chefs salad, or the tapenade, or the orzo salad, or the veal or the cavetelli.  Even the dessert, which I sort of liked, I couldn’t finish.  However, when I was a broke student, I was just hungry all the time and I loved feeling truly, stomach-distendingly full.  So if you want that feeling, is it available downtown on St.Catherines, a short walk from Concordia.