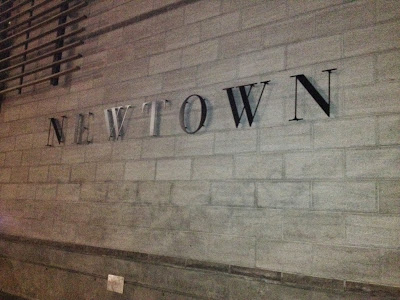 I got invited to go to Newtown by the same [really nice] gentleman that invited me to Atelier d'Argentine and Decca 77. This time, I invited Isa and she was more than happy to join me :) 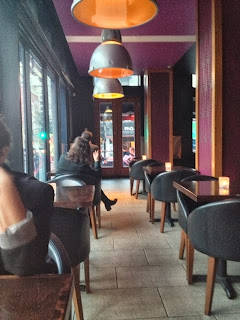 We got there and the hostess was nice enough to let us choose our seats. Well, there was practically no one. Newtown has two floors-1 is the lounge, 1 is the restaurant and then there's a big rooftop terrasse! It used to be owned by Jacques Villeneuve (hence Newtown) but was bought out five years ago.

We got a nice explaination of the menu from the maître d', Rafaël and our waitress. We decided that instead of picking our own dishes, we would let Raf (ya, we're THAT close) pick for us. 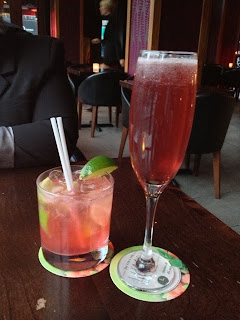 But first, we got some drinks, of course! The one on the right was La limonade royale: very tasty and quite sweet with prosecco and vodka. The one on the left was the Brazilian: watermelon with lots of alcohol. It was very strong and limy but it was still yummy! 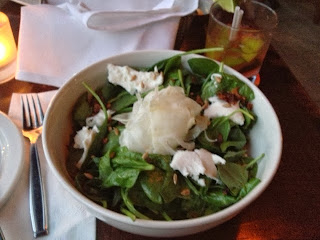 Raf started us up with a spinach salad with fennel, bits of candied prosciutto, mozzarella di buffala and a maple vinaigrette. I thought that the salad was a tad on the over portioned size and there was too much spinach. The first couple nibs of prosciutto were too hard but I ate a couple at the end which were quite nice. A good salty punch. The cheese was marvellous, mmm so soft and delicious! And the vinaigrette, although made of maple syrup, was surprisingly not overly sweet. 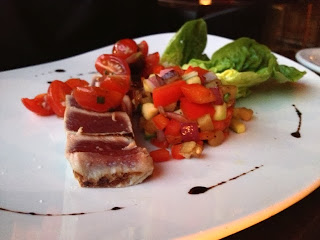 Then we got the nicest piece of tuna! It was perfectly seared and seasoned and just so beautiful---I almost (ALMOST!) cried. A little tomato salad and some ratatouille were present on the plate as well, although I would have been pleased just by having more tuna :p I have to say though that the ratatouille was brilliantly cut and that the tomatoes gave a refreshing aspect to the dish.


For the beginning of our main course, we had the risotto with deer (or stag?!). The meat was at the perfect temperature and it was nicely grilled. The risotto was cooked to perfection and was darn dideli creamy but there was something missing. And the plate was cold! Why? Whhhyyyyy? Ok that's enough.

After that we had, from what Raf told us, one of their most popular plate on the menu: cauliflower taboulé. The asperagus were great and the watercress fit actually really well (I usually find watercress a tad too bitter). The taboulé itself... meh. I certainly don't know why it's the most popular dish. To be honest, it didn't taste much. We even needed to ask for salt. There were much better things on the menu! 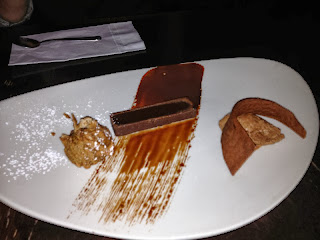 Three deserts on one plate? Hells yes to the yes! On the left, we have a deep fried (hello!) chocolate ball (well, hello there!). It was a bit chewy but had great flavours nonetheless. The middle one is a chocolate cookie that was a bit too dry but the onctious chocolate sauce made up for it. And last but certainly not least, the chocolate mousse. Mooouuuuusssseeee! It was chocolaty, it was soft, it was airy and it wasn't too TOO sweet.

Let's discuss service! Well Raf was great: he took good care of us and at the end, he even showed us the other floor and the terrasse (other floor is closed on Mondays). The waitress was really sweet and friendly and as previously mentioned, since we were practically the ones there, she was all ours :) The only bad thing I guess was that the water refills were too far and few between.

A very nice place to go with friends or even on a date. They offer food at reasonable prices. Just don't have the cauliflower taboulé.