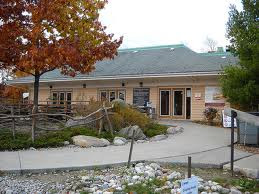 I decided to go see ze wife in Toronto over the weekend. Therefore this will be eating out in Toronto part deux! Ze wife went for a walk in High Park earlier this week and saw that there was a little restaurant hidden in there, so when I got there, she told me we were going to go eat breakfast there on saturday morning. We got there at around 12:30 that 'morning' and went into this eighty's ish restaurant that looked really old school but not in a good way. There are two sections in there: one where you go up to the counter and

pick whatever you wanna eat and then sit down and then there is the sit-down, you-get-a-waitress part of the restaurant. We chose the second one. We passed by this tiny table with only bottles of ketchup on it on our way to our table. May I also mention the abundance of plastic plants, some even creeping onto our table, in this restaurant. Ah, the charm of it! And the OLD carpets... bah.

You see when you enter this restaurant, you realise it's run by all these little elves, no, students... that are barely 16 (some looked 13 or 14). Therefore, the service was bound to be so-so. The waitress came to our table with the really-too-old-menus-that-u-can-barely-read-anything on. They had a nice selection of breakfas

ty stuff like omelets and pancakes and what have you. I chose my 'usual', the biggest breakfast there is on the menu: sausage, bacon, ham, eggs, bread potatoes. It was not the best breakfast, by far. First, three eggs= too much. Why not two? I think two should be the magic number here. But no, every breakfast contained three eggs (MY breakfast, all the omelets,...). The maple syrup that came with the pancake was obviously not real maple syrup but I guess that was to be expected. Ze wife ate the pancake and said it was really dry. My potatoes were so-so and there were not nearly enough on my plate. I don't know, I get THREE eggs, can't I get TWO and more potatoes please? The ham was a bit dry too. All in all, not exceptional.

desert after, I don't know why... we were already full :/ I had a cheesecake and it was nice but not as nice as many I've tasted before and the wife had the banana choco cake (which I found a tad too dry and too banana-y) and it was the same for her. (Rockaberry ROCKS!)

As for the service, we had many people coming to our table and at some point, we were confused; who is serving us again? We didn't get regular refills of water, and at some point, it seemed like all the servers were sitting in a corner, eating. It took us a while to find our server and ask her for the bill, took a while to GET the bill and then another while for her to show up so that we can tell we'd be paying interac. Not too satisfied of the service but again, these people were all learning. (you should have seen the busboy--who could not have been more then 13, trying to see how he could pick up about 12 glasses, 5 plates and cutlery without making more then 1 trip. hehehe. funny shtuff. He actually managed it in the end!)

It was fun to go and the prices were good, but I won't go back.

It's been like forever that I have been meaning to so sit there and work on a sunny day. I figure that being in the middle of the beautiful park it would be a really nice place to sit; maybe rustic or cottagey. But such a day has not yet come. After reading your post I guess my spidey senses and my palate must have known better. Thanks for the heads up. Now I won't feel so guilty for missing it. Sabrinder

Hey Sabster! ya it seemed like a good idea to go there but I def. wouldn't go again..