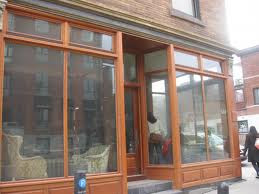 I used to study there with friends when I was in CEGEP and they still lived in Montreal. It's located at the corner of St-Laurent and St-Viateur. So after getting some bagels at St-Viateur bagels the other day, we stopped by there to a: get something to eat and b: relive old times.

When you enter the place, some might think it w 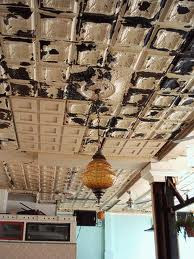 ould be a tad weird: old lamps and trinkets with old drapes on the old windows. There was dust everywhere: on the fans, the windows and even on the plants. There are two rooms and the one where we sat up on the stage is at the far back. Man is it musty in there! The washroom is also so fitting, as ghetto as the rest of it! It looks like an outhouse, without the hole in the ground of course!

Anyhoot, we ordered at the counter and then the girl brought us our stuff at the table. This is what we ordered: chili with nachos and yogurt (a nice twist on the sour cream with chili thing), an open-face sandwich and a croque-monsieur. The menu was basically composed of comfort food aaaand more comfort food, which was nice seeing as it wasn't too hot outside! The open-face sandwich was really good, kinda pizza-like with some sun dried tomatoes. I was not SO thrilled with the chili because a: it was vegetarian and b: not as good as my step-dad's(he makes the world's best chili!). The croque-monsieur had some brie in there and it was actually quite tasty, a tad salty but not too much.

As for the service, t 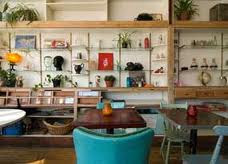 he girl at the counter was kind of weird: she was all shy and then we'd ask for a glass and she'd be like 'WHAT? NO! haha..ok!'. weird girl. We got our plates really quickly though, which was appreciated!

This is a great place to study in (there was practically no one talking) but not so much a place to go and have a bite. And THAT'S what I have to say about Cagibi!