As per usual... COUPONS!!!! We payed I believe 22$ for up to 48$ of food. Meaning you have la table d'hôte and usually, that's below 48$.
We arrived at 6PM and about 5 people waiters were... waiting right there for us... including about 3 ITHQ-ers, which made me smile. One of the waiters was learning at la SPEL (this teaching restaurant at ITHQ) when ze wife and I went last year and had served us! We got seated right away, and since it wasn't busy, got to choose our seats next to the window in this futuristic looking resto (walls and floors alike are made of marble and lots of stainless steel everywhere made me feel like I was in a shuttle or something :) ). 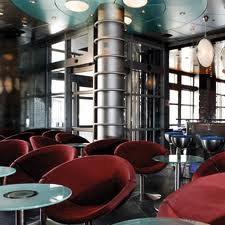 Took just a minute too long (you know how you FEEL it when it's been a bit too long)---for the record, ze wife doesn't think it took too long...) to get service after we got the menus. I ordered a minestrone, crevettes avec sole et risotto au maïs and ze wife ordered a tomato salad with chèvre with the same main. A couple minutes later, our waiter came to tell me that there wasn't any minestrone and if I'd like something else. So I took the crème de courge musquée which pleased me much but I wandered how come, at the beginning of service, they were lacking elements in the menu.

The waiter brought us the bread which was in a very cute little basket en métal, vertically oriented, very original :)
Ensuite, nos entrées sont arrivées :) My soup was good but it lacked a bit of flavor. Ze wife's plate was equally unsatisfying: the tomatoes were pale and again, lacked flavor. I have to give points for the presentation though: it was quite nice and appetizing. 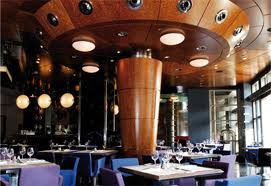 The service itself was good, our waiter was a talker, but he was a cutie so that was fine. We had pretty good service throughout the evening. The one thing that annoyed me was that we could see all the waiters agglomerated near the washrooms, talking, and this got on my last nerve. If you want to do that, do it where the clients won't be able to see you!

Service: 7.5. Good service, especially for the wine, our glass was never empty. But a couple things annoyed me as mentioned above.
Food: 7

ps: Half the time, the website is very VERY slow to load