On Monday, the wife and I had plans of going for tea and then finding a restaurant near by to get something to eat fast and then attend an improv match at the St-Ciboire. Well, we had the tea, and then decided we were too tired to actually go to the improv match and so decided to go look for a restaurant to eat at. We walked along St-Denis and thought about La Fabrique. That was closed. So we thought about Le Nil Bleu, an ethiopian restaurant, because we had been meaning to go there for a while. Yay, it was opened! And so we entered Africa! 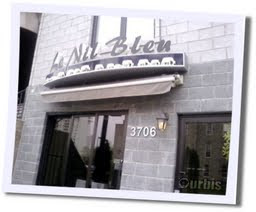 It was a nice little restaurant, very quaint, we thought. Upstairs, there is room for about 100 people and downstairs, there is a reception room for a private party of about 40 people. They have a nice decor, zebra and leopard prints on chairs, some african-looking sculptures everywhere. They were playing Amadou et Mariam which we thought was quite fitting! They also have a nice grand piano which is apparently used Fridays and Saturdays for a little ambiance. We got there at around 7:30 PM and it was about half full. We got a table right away and water was poured into our glasses. We bought a bottle of wine: they didn't have the one we wanted (one of the cheapest one) so we took another one (Fleur du Cap, an african chardonnay) which was more expensive so that was a tiny bit annoying.

We looked at the menu and immediately, we knew what we were going to have: a combination of four choices from the menu (for 2 people) for 33,95$. There is actually 3 selections you can make and we chose A:
1-Doro Watt (slightly spicy chicken with onions and half an egg)
2-Yebeg Alicha ( pieces of stewed lamb with potatoes and carots)
3-Beef Key Watt (tender pieces of beef, slightly spicy, simmered in a berbere sauce)
4-Yekik Alicha (chick peas cooked in curcuma and fresh ginger)

This combo was presented on a huge plate that we were to share. There was also a salad in the middle to freshen the palate, if need be (and the need was there, after all that spice!) 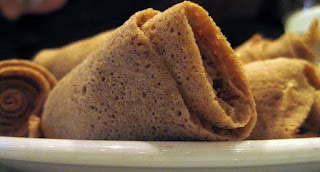 The tricky part was that there were no utensils! We were to eat with ingera(right),which is basically a thin looking bread or a crepe if you will. It was going to be messy, I thought, but turns out, it worked well! I wouldn't necessarily suggest this on a first date but perhaps a second or third one :)


One thing I didn't like that much was that on the tables, there were cloths and over it, a glass to prevent the soiling of the table cloths. Well, I didn't really enjoy the couple hairs that were tucked under there, in plain site. That was not too cool.

Apart from that everything was great. Even the washrooms were very nice, the stalls were made of glass and I found it very sleek. Oh but at some point, there was no more soap :(

We even made friends with the people sitting at the table next to us and had a nice conversation! Isabelle and the wife were talking about something (she is a journalist), while the husband and I were talking food, of course! he used to be a sous-chef and has a site called janroncommunications.com (Canada Travel News). It was nice to talk about our respective blogs and mostly, about the food!

Service: 9/10. Service was great. Our waiter was friendly and came to ask us if the food was good once and came only to serve water which was nice. He also did not rush us to pay the bill at the end because he could see that we had made new friends :)

Food: 7.5/10. As Isa mentioned, she wouldn't eat ethiopian food every day and when I asked her what she would eat every day, she looked at me with dreamy eyes and said 'butter chicken!'. hahaha!

A good, new, ethiopian experience! I would recommend this restaurant to anyone who's not afraid to eat with their hands!

I agree this was an excellent experience and completely unexpected. We stumbled on this location while looking for a "Quebecois Cuisine" style of menu. Every restaurant we passed was either closed or empty of guests as the NHL Montreal Boston game was in progress. This was the only populated restaurant on St. Denis. and was very inviting. We enjoyed our house white, at only $21. and meeting very interesting table side guests. When back in Montreal, we will return.