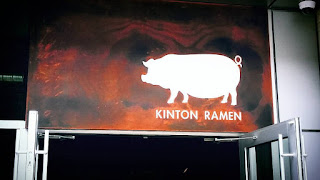 My token Asian friend Jer (you should totes know him by now) and I had made plans to eat at Kinton Ramen. This was exciting to me because A: I loves me a good ramen and B: this is the new kid in town. Sister (or bro?) of Kinka Isakaya (which I have yet to try), Kinton has already 5 locations in a very close proximity in T.O. Then you ask yourself why I wanted to try it! Actually, that ended up being the question I asked myself AFTER the meal. More on this in a bit. 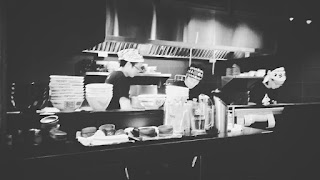 Kinton is located right smack downtown on Bishop in... an apartment building? I found that a bit weird and anti-climatic ish. The cool thing is that when you step into the restaurant, the staff screams out 'irasshaimase'!!!! Which means welcome or come in. I guess it must get annoying to do at some point. The decor was a bit too modern for me but it kind of worked with the low tables and the cute little blocks instead of chairs. Pfff, who needs a chair, really? There were about 60 of them in the house and about 20 more outside. It had high ceilings and a very nice/cool looking open kitchen where the magic happens. It had a calm vibe, even if there were a lot of business peeps there for lunch and you know they usually are in a hurry to eat and get right back to work! Ah, the corporates!

How it works ---and I absolutely LOVE the simplicity of it--- is that you pick a broth (pork or chicken), you pick a flavour (original, shoyu, miso, or spicy), you pick a noodle size (thick or thin) and then you pick extras if you want em' like corn, nori, egg, etc. Easy peasy. Oh and you have some entrees, that they are calling tapas. We knew we were going to be full with the ramen but hey, when in Rome right? I mean, OK, I remember that time when I was in Rome and.... oh nevermind. 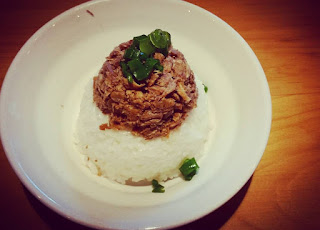 Ton Ton Don. I thought it looked like a little volcano. No? Well, first off, let's just say this was not the best looking dish I've seen. OK, it was one of the ugliest. Chopped pork seasoned with Kinton sauce (we detected mirin and soya) on rice. I'm not sure they meant it that way because it did say 'hot tapas' but the pork was cold and the rice was hot. I actually really dug that. Although very tasty, it was missing something. Perhaps some salt. The rice was perfectly cooked (ugh, not like that damned September Surf Cafe rice!), but I wouldn't expect any less from dem Japanese. 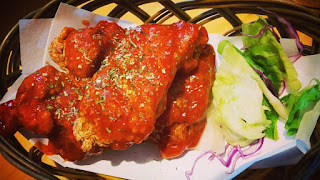 #thisisnotkaraagechicken. So disappointing. My friend tells me that karaage actually just means 'fried' (with some spices). Well, it was fried alright, but it was NOT karaage chicken. You catch my drift? What it was was fried chicken with some ketchup-y type sauce and some dried herbs on top. That. Is. It. They could have sold this at KFC. I gotta say that the chicken was very moist. And tender. If I had ordered BBQ chicken or what have you, it would have been a different story. But we ordered KARAAGE chicken gosh darn it! 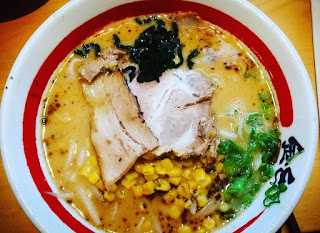 This is what I'd been waiting for. Maybe even dreaming about. For the past week. Miso ramen originates from northern Hokkaido in Japan (duh). Apparently, this region is colder, therefore they eat heartier soups with heavier and more unique toppings like corn and bean sprouts. At first I found it weird to have corn in my ramen but Jer set me straight and told me about Hokkaido. All hail Jer, the knower of all Asian things. When I have an Asia related question (you'd be surprised how often Asia comes up), I go to him. Let's get down to business. My expectations were oh so high for this soup. And then, went crashing down. Way down. Downtown. I'm getting off track here. Jer and I concluded that it was one step above bad, therefore, it was mediocre. The broth, even if it had the right consistency, lacked in flavour. It just wasn't all there. The corn was good but a bit blend and the pork was nice and fatty but a bit too thin. The green onions gave it a kick and the seaweed gave it a bit of saltiness. Iz a good thing Jer gave me some cause it was in the 'extras' and I hadn't picked any. Sadly, all in all, this was not up to par.
Service was OK. It was a bit inconsistent tho. We had 3 waiters at some point, and even if one of them looked like Scarless Johansson, it didn't change anything (plus 5 for Scarlett lookalike!). We had one at first that was very confusing: turns out all she wanted to know was if I wanted anything to drink. They also asked us if we were ready to order 1 minute after I sat down (albeit, they do have a small menu). When we were done our meal it took what seemed like an eternity for them to clear our table. And getting the bill was hard too. I don't get it because there were four of them walking around.

Unlike my friend Jer who went a second time with me, I shant return to Kinton.

The post is written in very a good manner and it entails much useful information for me. I am happy to find your distinguished way of writing the post.office furniture wynwood