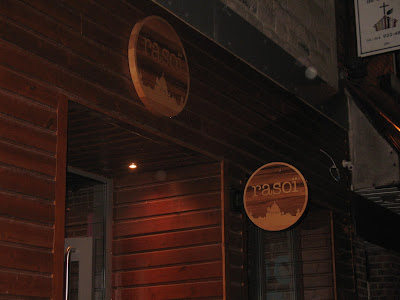 I was invited to another restaurant opening a couple weeks ago because well, that's what's happening now! And it's great! I'm really happy that my blog is getting recognition in the restaurant world :) Yay!!!

Anyhoot, this is a restaurant that's been opened for about one month and they had their official opening a couple weekends ago. I went with my friend Lea this time. 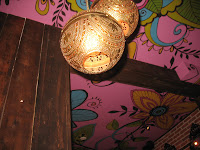 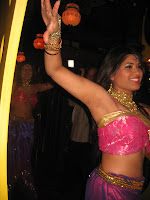 This indian restaurant is located about a 5 minute walk from Place St-Henri metro on Notre-Dame. It has about 60 seats plus about 20 downstairs. It has a modern style with cool paintings on the ceiling. You can tell they put a lot of hard work into making it the place that it is now. It has a good vibe going on and seems like a very chill place. The music was just loud enough (we could still hear each other talk). Oh and at some point, the belly dancers came out ! To add to the fun, they had henna in the basement!

They have very original cocktails at Rasoi, so we decided that we absolutely had to have one! I had the Cajun Bloody Caesar: clamato, vodka, piece of bacon (wow!) and a green bean. What an insteresting mix! The green bean was very spicy but very enjoyable, and the bacon was, well, bacon! Mmmmmm! The only thing that I thought was unfortunate was that the drink itself did not taste like bacon OR green bean.

Let's talk food! We chose to share an entrée and share two mains. For the entrée, we had the fish pakora. It was really hot when it got to our table which is always appreciated! It had a really great and tasty blend of spices but a tad too much batter and not enough actual fish. The fish that WAS present though was very moist. No one likes dry fish! It also had a great yogourt based sauce to counter act the spiciness of it all.

As for the main, we decided to have the less pricy mango, ahi tuna and sesame salad and the papaya and shrimp salad. To our dismay, there was no more tuna :( You'd think that on the official opening night, they would stock up, no? Anyway, they replaced the tuna with the shrimp---it was kind of weird how the waitress just brought us this 'new' salad without even checking with us if it was OK beforehand. Anyway, she told us it would be on the house so the fact that she didn't 'warn' us in advance kinda went away :) 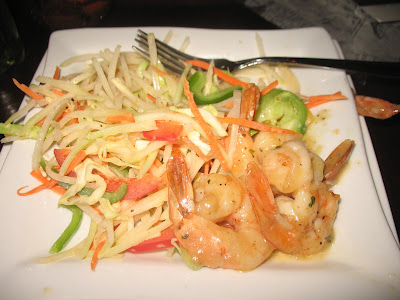 Alright, let's get to the judgin'! The [green]papaya salad was largely underseasoned. Sad but true. On top of it, unfortunately, you could barely taste the papaya. The shrimp though, we're heavenly. HEAVENLY! Couldn't get enough of them. They were cooked perfectly, big like I like 'em and had this thick sauce that tasted of butter and coconut! We asked the waitress what was in that lovely sauce but apparently, the chef wanted to keep that a secret. Hey, I don't blame him/her! 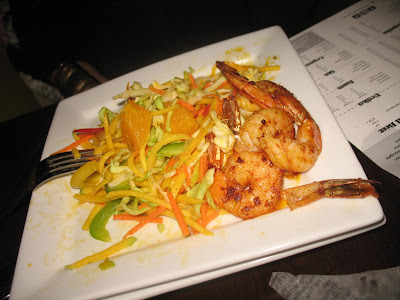 Now, the mango salad with grilled shrimp. Again, even if the mango was very good and very present, the rest was very much underseasoned :/ The shrimp were really great and the vinaigrette on the salad tasted of fresh oranges (it also had orange wedges in there)!

Let's talk about the service! We had a warm welcome as soon as we got into the restaurant: 'Miss Prévost, please follow us to this table...'. I love hearing that! As soon as we sat down, we had water, which as you guys know by now, is super duper important to me. And for the rest of the evening, the water service was amazing. The waitress was very nice and friendly and took the time to go ask the chef if she was lacking answers to our questions. It did take a while to get our food though, and when we got it, as previously explained, it was lacking the most important thing: TUNA. All in all, she seemed a tad nervous and there were many people there for the opening so I don't blame her.

Food: 7 The shrimp were amazing but the salad itself was tasteless
Service: 7,5

I would go back to this restaurant for sure. No doubt about it. And I'd order the freaking tuna.