I’d been meaning to go there for quite some time now, so a couple weeks ago, on my day off, I picked up some take-out. As the saying goes, you know it’s going to be good if there are Asians in an Asian restaurant. True that! This review will only concern the food because, as previously mentioned, I didn’t eat there.

I gotta say though that the place itself is tiny, located in a half-basement, badly decorated, with a tiny… HOME kitchen. Ya there’s a fryer, an old white oven, a little fridge… Also, the people working there (a young lady and most likely her dad) are so sweet and nice. As soon as you come in, they say hi, they give you the menu and while you’re waiting, they give you some water. On top of it, the wait is not much of a wait at all… 10 minutes tops. I love not waiting. 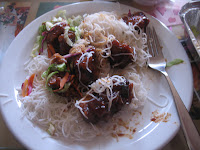 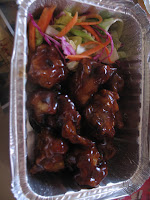 I had the General Tao combo which includes a soup, a spring roll, general Tao with either noodles or rice (I took the noodles). The soup is very simple but tasty enough. It has a couple pieces of carrot, some spinach and a bit of noodles. It has a very… uncomplicated taste to it. And it was HOT. The way you want your soup to be. Not cold (eek!!!), not lukewarm (come on!), but hot! The chicken was really good. Not what you think General Tao chicken should taste like. Well actually, General Tao chicken is a product of America (as y’all should know), so I think they’re doing a favor by having it on their menu because I LOVE the stuff. 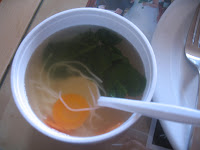 It had a great mix of sweet and sour and such a damn didelidamn good sauce coating the chicken. I just wished there would have been more to coat the blend-ish noodles as well! And well, one piece of chicken was a tad burnt and therefore very over crispy and therefore not too good :( The salad was nice but come oooon, who needs tiny pieces of vegetables if you have amazing GT chicken? The pork and veggies spring roll was nicely fried and had nice flavors. Just what you'd expect from an Asian resto.

I was very full at the end (maybe it was more for 1 and a half person?). Anyhoot, if you want real Asian food, go there!!!