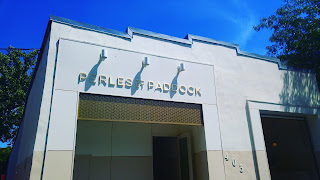 I've had my eye (well, eyes) on Perles et Paddock for a while now. Ever since I wondered what the f*ck had become of that old garage on Des Seigneurs in Griffintown. Well, they did a hell of a job. A HELL of a job. And so, this is where Jer Bear and I went for brunch on a lovely Saturday morning (let's face it, I can't afford their actual dinner menu :o ). 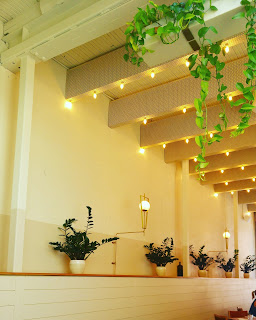 Perles et Paddock, as previously mentioned, is located in an ultra renovated old garage that was quite the eye soar on des Seigneurs in Griffintown. They made it into a legit wonderful looking restaurant. Like, a WOW restaurant. Like, a WOW WOW WOW one. You get the point, iz nice. Compared to what you see from the outside, the inside looks much grander: a big mirror at the back makes it look like a much bigger space than it already is and it seems like the never ending restaurant. Plants everywhere, two big garage doors that open up onto the street, and a huge skylight make it seem like we're still outdoors. The bar was quite spectacular, all dressed in marble, with uber comfy seats (along with a step for short people like me!), and quite an array of bottles under very favorable lighting. 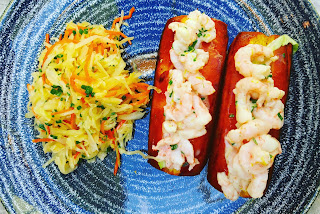 I loves me a good brunch and I was excited about this one, fo shiz! Jer bear had the guédilles aux crevettes de Matane (the best of the small shrimp...). The shrimpies were not in the usual hot dog bread; they were in a home made brioche. They had been mixed into this mayo-ish sauce that was supes taste. Just enough that we still tasted the deliciousness of the shrimp! They were like butta in ma mouth. You know what I'm gonna say though: not enough shrimp!!! NEVER enough shrimp. But I am also the person that, at 6 years old, was eating an actual PILE of shrimp in Maine on family vacays. I go cray for shrimp. Kinda like Bubba from Forrest Gump, you know. I found the brioche was too hard `n' dry for me. Jer bear found it alright. He's too easy to please, pffff. The coleslaw was on the effin ball. One of the best coleslaws I've had, like, ever. 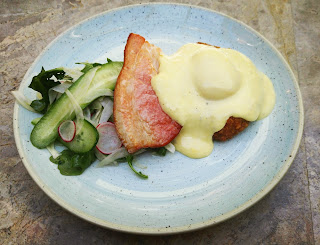 I had the surf and turf! Cod cake, hollandaise mousse, salad, and a big ass slab of bacon. I loves me a good big ASS slab of bacon. The salad was cut on the mandolin and was just dressed enough. You know, I'm talking skirt... not pants. The fish cake was a bit dry, and not even the hollandaise on top was saving it. It did taste good though, with just the right amount of dill and the yolk from the egg atop it, melting onto it. Mmmmm. The bacon was, you know, bacon: fatty and smoky awesomeness.

Service was a bit on the slow side. We had a nice welcome and quick water service at first, but then we waited what seemed like 8 hours for our food (I tend to exaggerate) and did not get more water until the end of our meal. They also didn't ask us if we liked it. I will also mention that they seemed to be overstaffed. Take care of yo peeps, especially when you are overstaffed! On the other hand, I must say that the dude at the bar, in front of us, was really quite nice and did flash his million dollar smile more than once :)

Ya, I'm going back for more brunch!