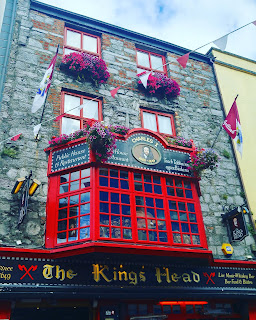 Fish n' chips first appeared in the 1860's in England and was spread throughout the UK in the 1930's. It's f*cking amazing and it's FRIED at its best. And THAT is all you need to know.
When Boo and I were in Galway, Ireland, in early July, two questions arose. ALL the time. 1. Are we having our next drink? And 2. Where are we having more fish n' chips. Fish n' chips is pretty much life over there, you know. OK, it is MY life. Same dif.
We had passed by King's Head in the Latin Quarter, on the main street, a couple times, before we went in. The place had a nice terrace at the back of the restaurant, also accessible by a little tunnel from the street. That is SO not well explained. Deal with it. The restaurant itself was quite big, with lots of movement! I just LOVED the pub ambiance. And this was more of a restaurant than a pub, so just imagine an actual PUB. I think we could've spent all day, every day, in a pub. Not necessarily drinking, but just hanging out, talking to the people, listening to awesome live music. And there I go, reminiscing. Ugh. 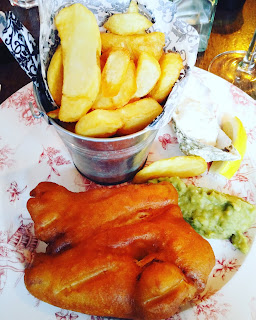 Let's begin. I really liked the way this cod (I'd say a LOT of the fish that is fried for this dish is cod) was deep fried. I liked the batter. It was different from other batter. I ain't no battexpert (ha, get it), but this one was so much fluffier and actually, rather lighter! The fish was perfectly moist (not sure what 'imperfectly moist' means.. I guess the word is dry) and that tartar sauce was just SO good. I think I legit fell in love with tartar sauce whilst in Ireland. You know what else I fell in love with? Well, except for a couple cute redheads, of course! That pea puree. Oh, that pea puree! With mint in there, it was the freshest thang on this side of town. Again, I'm making no sense. Anyhoot, that heavenly puree was just salty enough, and just tangy enough. Just imagine having, on your fork, a little piece of fish, slathered in tartar sauce and topped off with a bit of pea puree. HEA-VEN. This puree was LIFE!!! The chips, I could only describe as, well, larger and fatter fries. I loved them, but Bridge wasn't too keen. You know what that means, right? More for me! No wonder I gained, like, 4 pounds in one week!

Service was great throughout! We got our food quickly (in those cute-ass plates, no less!), and our drinks in a timely fashion too!

Yes and YES. Well, obviously, I ain't going back anytime soon. I can only WISH.
Posted by Marie at 4:02 PM