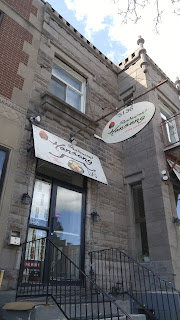 As you may (or may not) recall, the first time we tried to hit up Hansang, it was a bust. So we had to return. Jer bear was there, duh. And his roomate/ma friend Em was there as well. Yay for Asian food discoveries! 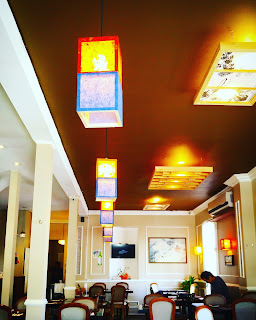 The place itself looks much fancier inside than it does from the outside. Let's just say that the outside of it looks a bit meh, with two run-down looking signs, and inside is all supes clean, with dark wooden tables and some Asian art. 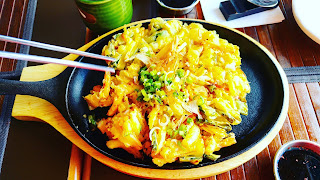 We had to have some starters, of course! First: the pajeon. I loves me a good pajeon. OK, it sounds like I eat this all the time, but, to be honest, I've had it only a couple times. Every time, with Jer Ber, and every time, it's to find out who would win the best pajeon contest. The winner (as of now) is Hansang! OK, this sh*t was SO good! Yes, it was deep fried, but sometimes, that's just totes acceptable. Right? RIGHT? The flavours were all there and the sides had a bit of crispiness to it. The green onions gave a little tang and the bonito flakes, well, hello. The only thing I found that I liked a bit less was the fact that there was too much tempura. But who cares! The rest was awesome. 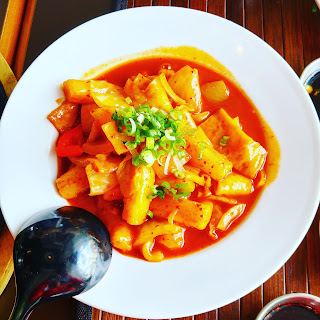 The tteokqbokki. Well, that's a mouthful. Thick, gnocchi-like, and rice-based, these big-ass noodles were waaaaayyyy too thick for me. Wow. It was just too much, you know. Sometimes, it's just too much. I felt like I was eating dense pillows. They were comfy and everything, but damn, they were heavy. I liked the sauce tho. Yay for silver linings! It was ubs spicy and I just love those chillies!!! 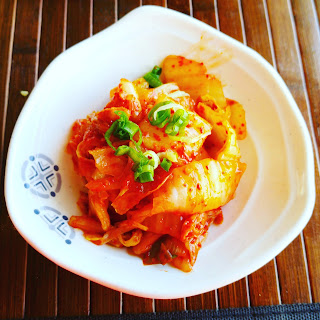 Kimchi. If you ever see me NOT order kimchi at a Korean restaurant, something seriously wrong is going on. As in, it might be code that the person next to me has abducted me OR something else. Mmm, I can taste it right now and my mouth is legit watering. I'm serious, I just made a puddle on ma desk! It was just fermented enough, just spicy enough and it was really fresh. Which, by the by, IS a funny thing to say about kimchi, because it's fermented cabbage. Hahaha. I make the best jokes. 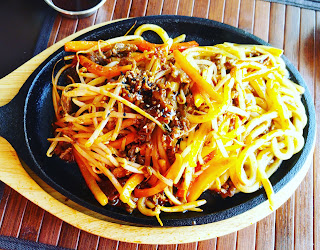 Beef teriyaki. Spicy, of course. This was right on the ball. You know, the meat n' spicy ball. That one. Don't even ask, I am aware that I don't make sense. The udon noodles were totes perf, thick and tasty. The veggies were not overly cooked, which is what I loathe. Why don't you make purée with that? GEEZ. They were good and just the right amount of spicy. Also, the sprouts were crunchy, which can add a whole other textural element to a dish. You think I'm exaggerating...but I am not. Dudes, I'm serious about my food, you know that! The beef was also the right amount of cooked. No one likes to eat a boot, am I right? It had all the right flavours: a bit sweet and a bit spicy. The perfect combo, basically.

Service was great throughout the meal: he gave us tea fast, food relatively fast, checked on us and was full on smiling the whole time. At some point we asked for cold water because there was lots-o-heat in our mouths and I found it quite hilarious that he only brought some for Em and I. As if the only Asian at our table was the strongest one. I think I cry less when I eat supes spicy food! He starts having the sweats way before I do :p (sorry Jer, tis true!)
And now, the scores!

I really enjoyed this place! On to the next Asian with my Jer bear! Do you even KNOW how many restos there are in MTL? Ya, that's what I thought.