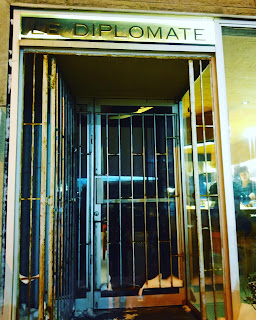 I was looking for a new restaurant to write about and, let's face it, I really needed one: I like to have a couple reviews on the back burner, and that's how I feel safe. I've had nothin' on that burner for the past week and I was starting to go a bit cray. And so, ma gurl Clo and I decided on Le Diplomate, since it had gotten good reviews from her husband, who isn't a stranger to good food and good times. He IS the head mixologist at the Fairmount Queen E after all!

We headed to le Diplomate, a year and a half old restaurant in nowhere, Montréal. I kid, I kid. But not really. Seriously, it's in front of the Home Depot On Beaubien. AWESOME view. Hahaha! I mean, it is close to St-Laurent and little Italy and all, but for ME, it was waaaaayyy out of my way. This tells you how much I wanted to go! The door is almost camouflaged, and I walked right passed it. Clo stopped and was like dude hello. I gotta say it does not look very inviting from outside. It looks more like, what's the word I'm looking for? A prison. Yep, it looks like a full on prison. 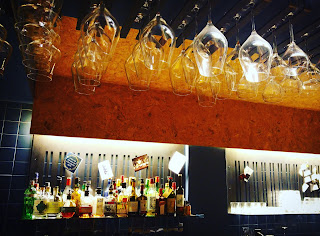 When you enter the resto, it's a different feeling :) A long counter overlooks the kitchen, and only a couple tables surround it. We obviously wanted first dibs on what felt like the chef's table, so sought after in other restaurants . You get to see how the chef works and how everything happens!!! I LOVE that! We sat down and I immediately mentioned the music: 90's music from ma time. That made me very happy. 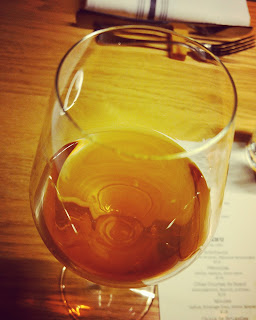 We started with some wine. Everyone should start a meal with some wine; this should be a universal rule. Almost without looking at the wine list (which is quite extensive, by the way), Clo said "we'll take a glass of orange wine". I was like WTF is orange wine. Turns out it's a thang, man! To sum it up VERY shortly, orange wine is a white wine with tannins. Read up about it here: http://winefolly.com/review/orange-wine/ It was sweet, it was sour. It was almost citrusy. A very nice and new discovery! It's rather hard to get: apparently some SAQ get about a case a week and an orange wine obsessed person just buys the whole thing ASAP. Some restaurants have it but they are quite rare. Orange wine is gaining in popularity, people. Sell it. Sell it good! 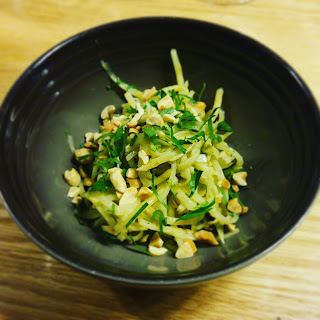 Our first bouchée was celeriac with green curry, coconut milk, and peanuts. This was such a great introduction to Le Diplomate!!! We had our first bite and were instantly wowed! That green curry made such an impact on our taste buds! It wasn't over curried, if that's a thing, and it legit tasted refreshing. It was like eating a nice curried noodle, but without the carbs! Such a great mix of flavours. The peanut offered a crunch to counterbalance the celeriac. Everything in this dish was on the damn ball. 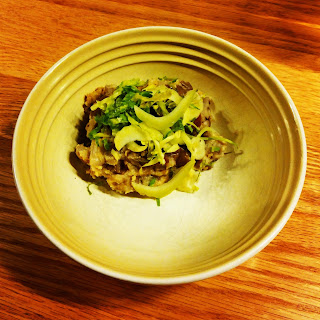 Our second bouchée was eggplant, sesame, green onion, and gai choi. This was a hit and miss. Firstly, the colour wasn't ubs (uber, get with it) appetizing: somewhat grey. Grey food is not the best thing for the eyes, ya know? The eggplant was a bit mushy (technical word, of course) and unevenly salted. The rest was great and it was my first time eating gai choi, which, before rereading the menu, I thought was fennel. #dumbass It added the crunch that was much needed with that too-soft eggplant. Needless to say we didn't go cray for this. 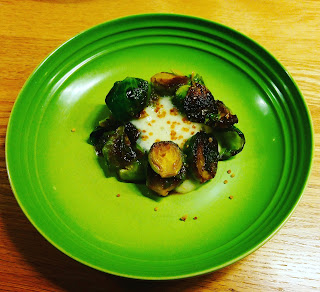 We continued with the regular menu next. Brussels sprouts, tamarin and quinoa. This was another wow experience. Have you ever tasted quinoa foam? No? Well, we did! And it was magical. It legit tasted of quinoa and they added some acid and some honey to balance it. The brussel sprouts were perfectly charred. It was such a cute little dish and an awesome one at that. I'd go back every day only to have that bad boy. 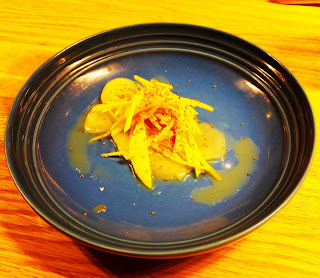 Scallop with kohlrabi, daikon and peach. The scallop was raw, which, let's face it, is the best way to eat it. There were also camelina seeds, which are also called gold-of-pleasure. HAHAHA!!! These little balls of heaven taste akin to hazelnut. Mmmmm!!! Scallop and camelina: match made in nutty heaven! I didn't taste the dikon much and the kohlrabi was, on the other hand, a bit too present. Maybe it's because there wasn't enough scallop in there. ALWAYS put more scallop. ALWAYS. Or, you know, in a perfect world. I thought the kohlrabi tasted way too much like the celeriac, even though I am aware they are two different vegetables. The peach also wasn't sweet enough, so the point of putting it in there was sort of lost. All in all, not a big winner. 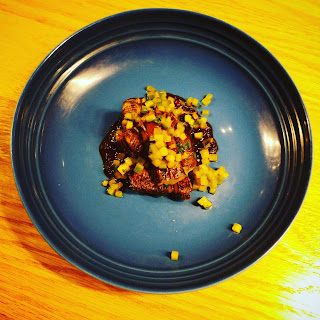 We had only ordered four dishes and had to order another one because we were still totes hungry. We had the salsify with cucumber, mint and black beans. I think I've eaten salsify once in my life so I had no basis for comparison. This was really good. It was good IN MA MOUTH. I loved the salsify: texture and taste were right on. The mint added a bit of sweetness and the black beans added a bit of a salty side to it all. The cucumber was perfectly cut in a perfect brunoise. It was perf. Did I mention the perfect cut? Mmmmya. All these ingredients went really well together. Who would've thought? 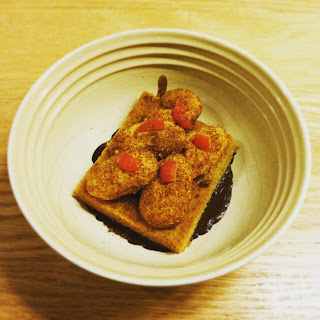 To finish off, obviously, we had to order dessert! They had three choices. We had the carrot semifreddo with spiced cake, chocolate and églantier. OK, apparently, 'églantier., in English is 'dog rose', but that's just weird. Anyway, moving passed it. The eglantine gave a punch of flavor and the semifreddo was just thick and carotty enough! Yum! The actual cake was unfortunately a bit on the dry side and the chocolate would have been much better on top than on the bottom. This way, it would have enveloped everything. Since it was right at the bottom, it was harder to get to while eating the dessert, and in the end, harder to... lick off the plate :)

Service was awesome when we first got in and as soon as it filled up, it became a bit slower. No wonder... they were only two! The woman was really sweet and smiley and the chef seemed really calm even when the resto filled up. He just did his thang. I give him props for bringing out dishes in such a timely fashion. We were asked if we liked our food and were offered dessert at the end of our meal. They answered all questions we had about our dishes.

It's so out of my way that I don't see myself going back right now. Perhaps in the summer time when I won't wait FORTY minutes for the bus. Ew.