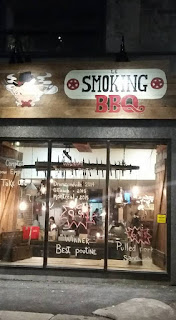 I was invited (yes, yes, I'm THAT special) to try a new-ish restaurant recently. Le Smoking BBQ. BBQ? Fo free? Hallo! Actually, it was a food truck first and now they've opened a place on Ste-Catherine right in front of the Forum. I invited my friend Bridgert, who had been to a previous restaurant invite that had turned out to be God awful. This was gonna have to be good. 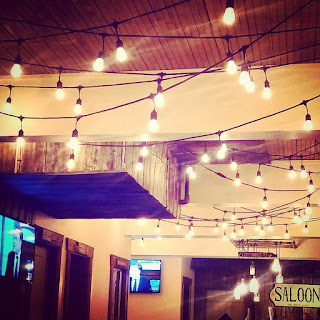 The place is huge: many big tv's (which I'm not too fond of, but I guess it was OK in this case), two dining rooms, a bar, a huge open kitchen. Country music was playing and I thought that was very fitting for a BBQ joint! The floors were half cement, half wood and the tables were made of somewhat used up wood, which gave a nice style to the restaurant. Oh, and I absolutely loved the light fixtures! SO cuate!

Our plad wearing waiter (seemed to be the theme-and it was oh-so-cute) came and introduced himself and told me that usually you order at the cash and get your own food (and then you place your tray on a garbage...) but that tonight we were going to get served. What up! My guest was late (hum hum) so I looked at the cocktail menu. The 'menu' was barely three drinks, which was quite disappointing. I mean, why do you have an actual bar if you only serve up three kinds of drinks? Anyhoot. I ordered a Bourbon Caesar. What! I thought 'hey, this will be awesome and different AND awesome'. 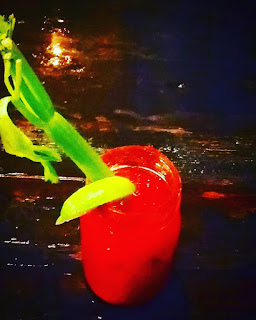 Well.... you guessed it: it wasn't different nor awesome. Grrrr. It actually barely tasted like anything. When I have a drink--and these days they are few and far between--I want it to taste like alcohol damn it! Although I did detect a hint of cinnamon and a tad bit of spice, it was unfortunately quite bland. Like something was missing. I dunno, maybe someone had replaced the alcohol tap with WATER. Ha ha ha. No, but seriously.

So, we pretty much ordered everything on the menu. Cause, well, we be pigs like that. And we just HAD to taste a variety of dishes. For the blog, you know!?! 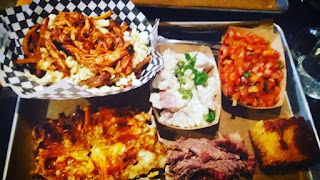 Yep, this was THE plate. Ugh, I'm getting a stomach ache and gas just looking at it. Ha. Haha. But really. Let's start at the beginning: potato salad. I don't even feel like talking about this salad: it tasted like water. Like nothing. I literally felt nada on my taste buds. Tomato salad was a bit tastier but could have been better seasoned. The Mac n' Cheese waffle was very heavy, very cheesy (which is the number one thing that you look for in a mac n' cheese) but burnt at some spots and the taste wasn't particularly there either.  The corn bread was dry and very greasy and barely passed the corn bread test. The poutine was good and well seasoned and I think it might be the only thing on that huge plate that I would order again (and as you may know, I am not usually a poutine fan). The pulled pork was good but was half fat sooooo... Oh and everything, yes, EVERYTHING, was on the cold side. Bah. What a nice way to ruin my dinner! The sauces on the table were really nice though: the coffee sauce I actually really dug, the spicy sauce was the least appreciated by me cause I'm a spicy kinda girl and it wasn't nearly as spicy as I would have liked it to be, the mustard sauce had a nice kick to it and the sweet BBQ sauce was a tad tangy and went well with everything. I also just want to mention that eating on (read: cutting into) a piece of paper is not the best. There, I've said it. 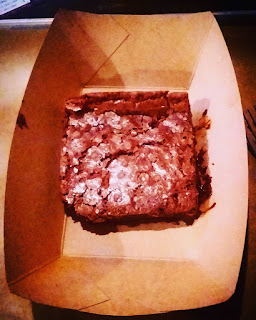 This was one of two desserts on the menu. We both preferred the brownie over le pouding chômeur. As you can see this is brown on brown ON brown. It's very sexy; the new 'in' thing if you like. Juuuust kidding. It had a crispy, perfect crust, and inside it was a surprisingly great mix of hot and cold. But it was a simple brownie that I could have made at home. Nothing special.

Service, as I mentioned, is usually limited. We got the good stuff because I was a guest that evening. Our waiter was pretty awesome and we got everything served to our table. I felt like I was in a cafeteria when I had to bring my huge 'plate' to the garbage after we were done.

Mmmmya, I don't think I'll go back. Even though I'd eat that brownie again right about now.

ps: I am aware that I am a tough cookie and hard to please when it comes to restaurants. Hey, that's why I'm a food blogger. If I seem extra tough, it's for the good of the restaurant :D

pps: Sorry Bridgert, you are quite the unlucky person (well, we all know that!) :p