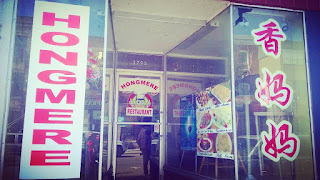 My friend Jer and I had been meaning to go to this restaurant for about a year and a half and it finally freaking happened last weekend! What!!! I was looking forward to eating 'real Chinese food'. Not that crap Manchu Wok, Tiki Ming or the other ones that are advertising 'Chinese food'. Come on people, General Tao chicken is NOT ASIAN. Thank you for listening. That'll be all. 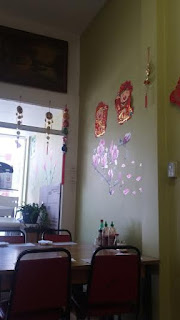 You could walk right past this place and not even know it: it's tiny and does not stand out in any way, shape or form. Even when you're looking right at it, you wonder if it would be a good idea to actually go IN. Anyway, obviously, we DID go in. Surprisingly, the place holds around 26 seats. The room is decorated with, you know, Asian-y art and stuff. Dudes, I ain't Asian-ist, I'm being realz. Lanterns, fake gold stuff, the usual, really.

This establishment serves up north-eastern Chinese and Szechuan (south-western) food.  I was letting Jer do the ordering because A: he had been there many times and B: he knew his sh*t. Oh and C, he speaks Chinese. You know, a detail. Jer has these evenings called 'Strange Meats' where we go somewhere to eat cartilage-y, squishy, gooey stuff, which, although I really tried, and as a food blogger, I should be open to everything, I just can't effin do those kinds of textures. So I kindly asked (read: threatened) him NOT to order that cucumber and egg soup or the intestines, kidney or ears. 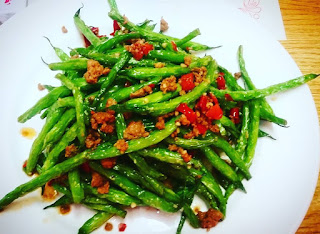 Stir fried green beans with minced pork. This looks normal. This looks just alright. This looks almost a bit boring. No. It was effin amazing. Well, first of all the green beans were uber deep fried, which, as we all know, makes everything better (I hate that!). They were crunchy and greasy and delightful. I love grease. Damn it! Second of all, that pork. Oh, that pork. Little bites of goodness. It had something like Chinese 5 spice that made it pop with flavor. I write 'something' because Jer and I, after researching the dish, can't find any example of it with 5 spice. Hot pepper added another element to the dish. That heat was awesome with the 5 spice and the beans. 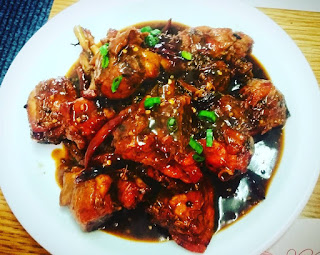 Chicken with special sauce. How special you ask? Oh, very! Tasty and on the thick side, I wanted to dip everything in there. The ingredients that we remember are the following: soy sauce, vinegar, black pepper, Szechuan pepper, brown sugar, Shaoxing wine and green onion. It tasted sweet and a bit sour. Yuuuuummy! The chicken was deep fried and then stir fried. Yep, fried was the word. Nice and crunchy on the outside, a tad dry on the inside. But there was the sauce so hey! The hot peppers and chives gave it that extra kick. I love me some kicks! 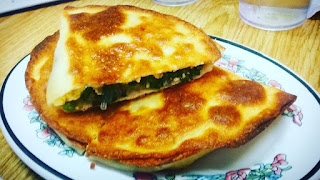 Leek pie. Yes. This was, according to Jer, from a usually-less-tasty part of China, if that's possible. Well, he were wrong: it was awesome. By the way, this was also fried. Ha, big surprise! I mean, why wouldn't it be good? It had leeks, glass noodles, egg. Everything was to perfection in there. But you know what made it even better? Just dip it in the sauce man! Ya, dip everything in the special sauce.
Service was wonderful. That guy spoke quite a rare language: Chifrenglish. That's right. Perfect Chinese (I presume. Oh, I mean, I know :p ), perfect French and perfect English. This is a rare occurence and I loved it. He was friendly and explained our dishes. Water service was good too. Hahaha, ok, it's becoming a bit ridiculous how important that is to me. Whatever, I like to be hydrated!
And now, the scores!
Food: 8
Service: 9
I'm totes going back! There's a lot more deep, DEEP fried stuff I have to try.