Candide is one of the new restos in Griffintown. You know, where there's a new restaurant every freaking week? On top of it, the maître d' is my brothers' cousin (it's complicated)! Oh, on top of that, Candide is located pretty much right smack in front of my restaurant. Hello!

Since it was going to be a nice, pricey meal(a pricey meal for me is over 30$!!), I wanted to share it with aaaalll my friends! No, not all 300 of them (hehehe), a select few. So there we went, E, Jer, Em, Cam, Bridgert and I, off to one of the hottest new restaurants in town (http://www.ledevoir.com/plaisirs/restaurants/457605/candide-au-presbytere)! 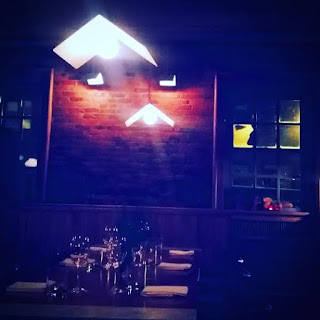 I was obviously the first one to get there (I'm ALWAYS the first one... it's like a rule written in a book somewhere or sumthin', I swear to Heysus!) and Valérie welcomed me with a huge smile and took my jacket and my scarf...and my mittens... and my tuque. Needless to say it was a cold, snowy kind of day!

Candide, with its downright homey feel and low lighting, makes you feel very comfortable and at home as soon as you walk in. Wooden tables with marble ends and green leather padded seats kind of gives out a cottage-y feel. I loved it. Some nice jazz oldies were playing¸ and that totally completed the ambiance for me. The place itself is quite hard to find (I had to send my fellow dining guests a map), with it not being on an actual street and all. In their defense, there IS a sign tied to a tree on Notre-Dame....

Candide offers a 4 course meal for 43$, with two entrées, your choice of main and your choice of dessert. QUITE the deal if I may say so myself! I would have loved it if the waiter would've suggested a wine pairing for every course (I believe they do that now...) but we settled on buying some bottles for the table. It's cuisine is kind of wood-sy, let's walk in the forest, eat something we don't usually eat kind of cuisine. I despise always seeing the same thing on menus (beets and goat cheese is so passé!) so this was a breath of fresh air. A plus is that they change it every season (and a bit in between). They put stuff on the menu we had never even heard of! That's eight points right there. Why eight? Cause it's MY blog :)

Let's talk food, shall we? 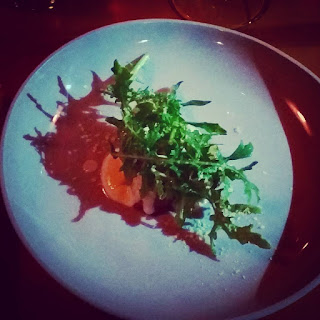 First entrée: wild arugula, buttermilk and sweet potato. The arugula was oh-so-fresh and crunchy; nothing like the arugula I buy at Super C and curse at when it goes bad 2 days later. The buttermilk sauce was lovely and a tad bitter and thick and so delightful that when I saw bread approach the table (I'm imagining floating bread here...), I dipped it as quickly as I could. The potatoes were nicely cooked but the skin was a bit thick and annoying to chew. 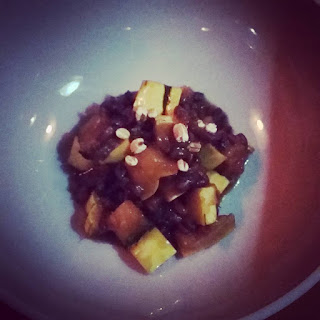 Second entrée: squash, rye and parasol mushroom (again, I'm imagining floating parasols--what is wrong with me?). Now this was definitely like eating in the woods... OR eating THE woods? Hehehe. The rye was a bit too hard for my liking and for my stupid stupid brittle teeth. The mushrooms were soft and although you would argue that they did just taste like a mushroom (ok, people that hardly know mushrooms would say this), they had a special taste, just like enoki or oyster mushrooms do. It was basically like I'd just picked them out of a clearing (you know, like a deer would!). The squash was cooked to perfection and became almost buttery. Mmmm, I want some now. NOW! Ok, imma gonna calm down. 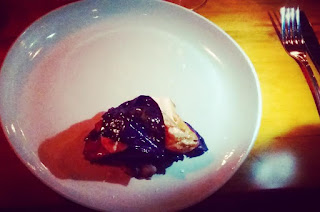 Main: pheasant with Blue Jay beans and red cabbage. It kind of felt like a deconstructed cassoulet. For the record, the plating didn't do it for me: everything in a tiny corner of a huge plate, the cabbage on top of the meat. I actually thought for a moment that they were going to come back and put a bowl or something in that empty space on my plate.

Although the pheasant was nice and juicy, it lacked in taste. One would even go as far as saying that the pheasant wasn't too pleasant. Hahaha. I can totally picture Dr. Evil telling that joke. You know, with the little finger? Aaaand I'm officially off track. The level of doneness was absolutely perfect and the lovely juices were there, it just, in my opinion, didn't taste like much. Perhaps it lacked salt, who knows. The cabbage was cooked to vegetable perfection: not too crunchy, not too soft, just right. Boucle d'or, sors de ce corps! On top of it, it tasted somewhat smoky, which is a flavor I absolutely love. The beans were very tasty and added a certain texture to the dish. And by the way, it looks like Blue Jay beans are pretty darn hard to come by. Either that or the internet lied to me. I really do hate it when it does that. 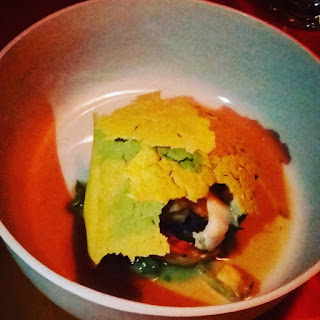 Second main: clams, leeks and celeriac.The clams, although few and far between, were salty and briny and all that kind of salt water goodness. The celeriac, was surprisingly cooked whole (I usually see it in mashed form or cut julienne style). That and the leeks together was a great mix of flavours. One I would like to get again soon. Or, you know, right about NOW. 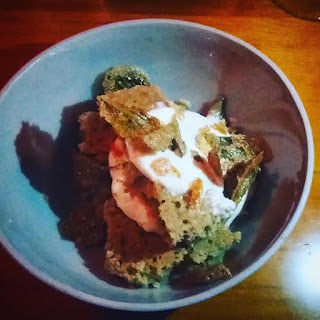 Dessert: Angelica cake, honey and scotch lovage. Such a nice, peaceful description, no? Angels and love! Hihihi! The cake was oh-so-moist and the honey added the sweetness that I needed after such a meal. The scotch lovage seemed fried but I think it was crisped using another method. I gotta say though, and please don't get me wrong because I used to l-o-v-e it, but the whole dish tasted like pot. As in marijuana. Seriously, I was burping pot for at least a couple hours after and it was weirdly lovely. But apart from being illegal, this dessert was sweet, fluffy, and again, kind of like I was in the woods! I swear, I'm sure if I had turned around at that moment, I would have seen Little Red Riding Hood! SEE what pot desserts do to me? Sheesh! 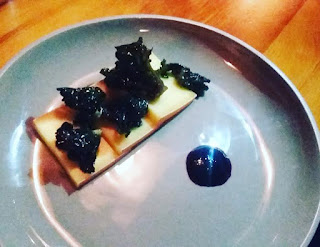 Second dessert: Pikauba, kale and sorb. Pikauba is a semi-soft cheese straight from Saguenay-Lac-St-Jean aged 3 or 4 months. It's so creamy, it almost melted in my mouth. I swear! And the sorb, which resembles huckleberry, was awesome and such a great pairing with the cheese. The kale was a great addition on their part and went perfectly with the whole dish.

Service was wonderful: our waiter explained every little detail and knew all the wines by heart (there were many) and talked about the menu in great length. Our water glasses were always full and the wine service was done the ITHQ way. You know; you make the person that is ordering the wine taste first and then if she/he says it's ok, you serve everyone else and you top of his/her glass last. The waiter was very upbeat and made it seem like we were the only ones in there (by a certain point, the restaurant had somewhat filled up). You could see he was passionate about what he was doing. So was the maitre d' Val. Their hearts belonged in that restaurant, as corny as that sounds.

Here are some opinions from my friends that came along...Some were actually scared at first because the portions were so small but after the meal, you could see they were mostly full. One of them was not at all pleased when she tasted both desserts one right after the other and thought it was 'disgusting'. I did the same thing and it was just fine. I loved the attention to details: how to place a fruit in a dish or a perhaps a leaf. Presentation was very 'soignée'.

Here is an elaborate opinion from my fellow student at ITHQ (which obviously means her opinion matters most, hahaha!): 'I think that it is not a restaurant for everyone. The lack of flexibility in the menu, the price, the ingredients; it felt like a tiny food adventure, and you have to be willing to step out of your comfort zone i think to really enjoy it. Though nothing blew me away, I  think all the food was well presented, well executed and thoughtful. It might be because I'm a spoiled child who goes to too many restaurants (if that is even a possible thing) but I enjoy not knowing about everything on the menu, I enjoy being surprised by new tastes and new textures and having to think about what I'm eating. As it opened just a couple of months ago, I would say it was a "wait a few months then come back" cause it wasn't bad, but it wasn't really good either.  I think it will become better with time.' Yep, I believe Cam pretty much summed it up.

So with no further ado (cause we know there's been enough ado here), here are the scores.

Although a tad pricey (damn you, wine!), it is a redo for sure. You know, perhaps with my birthday money or next Christmas :)