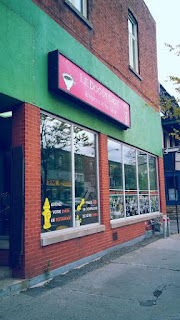 There are two restaurants in the vicinity that accept dogs: the Hot Dog Café on the south shore and Le Doggy Café on the plateau. Well, since I refuse to step foot on the south shore except for an emergency (bomb threat, tsunami, perhaps an 8.2 magnitude earthquake) and that I went to school with the owner of Le Doggy Café, you guessed it, that's where I went last week with Val and her pooch, Lola. 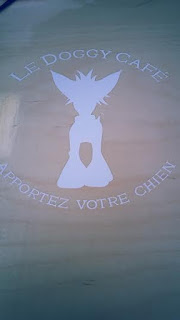 Le Doggy Café sends kind of the wrong message from the outside. I mean, it looks rather... boring. If I hadn't known it was there, I would have walked right passed it. It actually looks quite lame (sorry Gab!). It's when you get inside that it gets better! Way better. Or as I like to say: whhhhaaayy. It actually is a huge space with high ceilings and is really darn cute! There are two little nooks that are kind of hidden and that are surrounded by little lights; you know, if you want to have a romantic dinner with your dog :) OR if your dog is on a date? There's a play area with some toys and a big bowl of water too. Treats are given out when dogs come in which is super cute! Oh and they partnered up with some dog adoption places to have 'adoption days' at the restaurant, which I find uuuuuber awesome! They also have a very active facebook page with lots of freaking cute dogs (https://www.facebook.com/LeDoggyCafe/?fref=ts)!

When we got there, we were alone and as luck would have it, the restaurant actually filled up within the next 10 minutes with lots of dogs, big and small (cute AND ugly in my opinion...hehehe). It was really cute seeing them run around, making dog friends (or, I guess in this case, we can just say 'friends'). Lola got so exhausted that after leaving, she slept in the car and crashed when we got to Val's house. I don't think she got up for at least a couple hours. 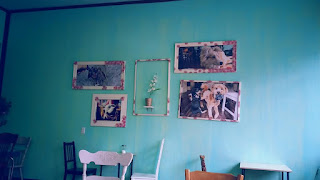 Before getting to the restaurant, we had walked up the Mont-Royal and I believed my toes were starting to get frostbite. Seriously. I was in dire need of something hot. Like right effin now. Luckily for me, they serve tea and other hot beverages so I had myself a nice chai latte. Oh yes! 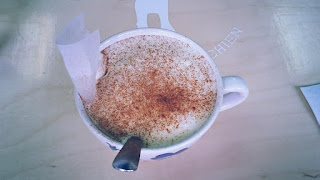 This hit the spot. The foam was perfect and although the chai tasted a tad diluted, it was tasty and hot and warmed me up in 5.7 (that's right!) seconds. Mmmmm I could go for one of those right about now. 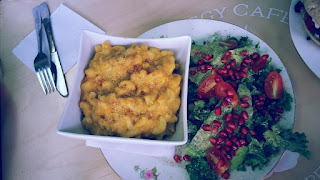 This resto has a vegetarian menu with some vegan and gluten-free options. Well, we just had to have ourselves the vegan mac n' cheese! What what! Brraaap brraaap! OK, imma gonna stop. Let's start with the salad: we could either have kale or spinach. Hello my fave kale, we'll have YOU! Pomegranates adorned the salad which made it that much different than the usual boring side salad. The kale was crunchy and fresh, the tomatoes added a bit of acidity to the mix and the pomegranates, a sweet side to it all. The avocado could have been a bit riper but hey, I'm in the business of cutting avocados, so I know they're difficult :) The vinaigrette was dill based. Ah, dill, my spice foe. If you ask me what herb I despise, I'd be quick to answer dill. But you know what, strangely, it was....not bad. It's a bold move to put a dill dressing on all your salads! Hum, maybe THAT's why she was the best student in my class. In any case, maybe there should be an alternative because dill is a bit like fennel or like black licorice; you either love it or hate it.

And now, the macaroni. Well, it was just damn perfect. Creamy, cheesy. What else would a girl want? It was even still hot after 15 minutes. Now, THAT I like! There's nothing worse than a hot meal in a cold plate. Val thought the pasta was a smidge overcooked and after further consideration, I agreed. But again, a smidge. 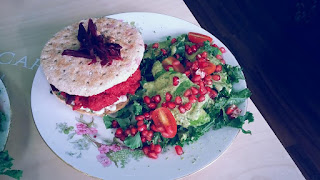 The beet burger: beet patty with goat cheese, mayo and walnuts between two thin pieces of bread. All in all, this was good. I had never had a beet burger before! The goat cheese is obviously an...obvious choice when it comes to beet, but you know what, it's because they are perfect for each other. Just like Justin Bieber and Selena. Ooooor something. Forget I said anything. OK, there was whhhhhaaaaayyy too much mayo in there. It kind of took the I'm-eating-something-healthy side of it out. The beet patty was actually pretty damn great. It tasted like beet, looked like beet. Hey! It's a beet patty :) The bread was nicely toasted and felt lighter than an actual hamburger bun. The nuts were awesome in there, adding a textural element and lots of flavor. The beets on top were... unnecessary. And tasted way too much like vinegar. Oh and when one of dogs jumped up and almost took a bite out of my burger, I realized why we don't allow animals in restaurants. That dog was lucky he was cute :)

Service was good. Warm welcome. And when I thought 'hey we could do with some more water', she was right there. It was good, not special. I also found it a bit weird that when we were saying stuff about maaayyybe a dessert, she said something like 'oh not after the big lunch you had' or something. I was feeling more like 'hey that red velvet cake looks like it could go into my mouth'.

I can totally see myself going back! Obviously to see my friend but also to see dem cute dogs :)