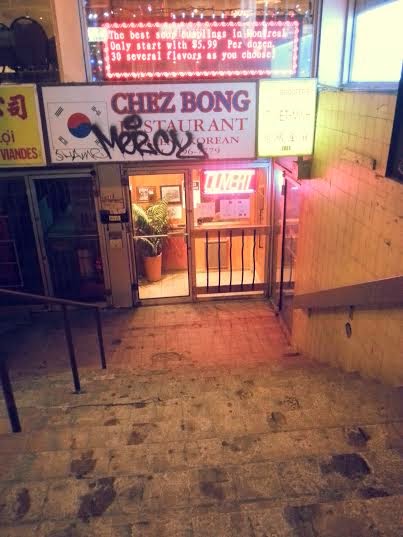 I had been meaning to go back to Chez Bong for a while--I went about 5 or 6 years ago mostly because it was in the book 'Cheap Thrills' (they tell you where you can eat for cheap in MTL). Obviously I had loved it AND I love Korean food AND it's in Chinatown (because here, if it's anythin' Asian, it's in Chinatown...which we will henceforth call Asiatown). 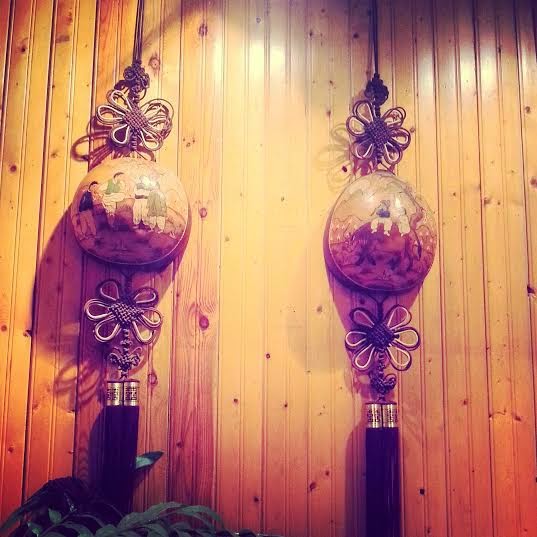 Anyhoot, went a couple weeks back with my homie Lea with a sole purpose: to eat a good bibimbap! Oh how I love thee!If you don't like bibimbap (for shaaaaaaaaame!), you have about 27 choices on the menu. Dem Asians don't do shiz half assed I tells you.

Aight, so when you get into this resto, there is, you didn't guess it, techno music! What the what? The place looks nice and out of the ordinary with wood everywhere including the walls. The ceiling though is made of panels... with some mold. I tried not to concentrate on that. 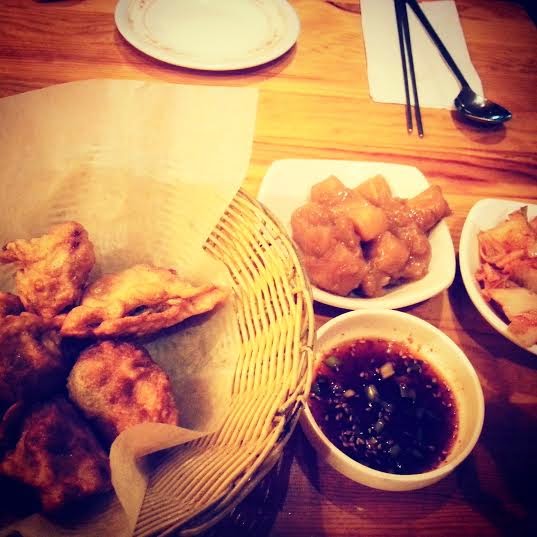 We started off with some pork dumplings. The looked great but turned out to be a bit on the doughy side and even though there was a nice, vinegary sauce to go with, it couldn't save the dish. They were still alright though, por favor don't get me wrong (that's right, I use Spanish only when I'm serious about somethin').

They also brought us some boiled potato cubes and my fave by 8000 units (it's a thing!---remind me to tell you about that time in the tent when my friend Jadster said I was taking up 8000 units, just do it!), the BEST thing ever to come out of Korea, kimchi. Ps: I tried my hand at making kimchi last summer and it was quite good indeed (if you don't know what kimchi is, for the love of little baby Jesus, look it up! http://en.wikipedia.org/wiki/Kimchi).

The potatoes were a tad overcooked and although they weren't necessarily bad per se, they didn't taste like much. Obviously the kimchi was wonderful. Oh God, I want some now! That fermented cabbage, in my mouth, RIGHT NOW. OK, I shall calm down. 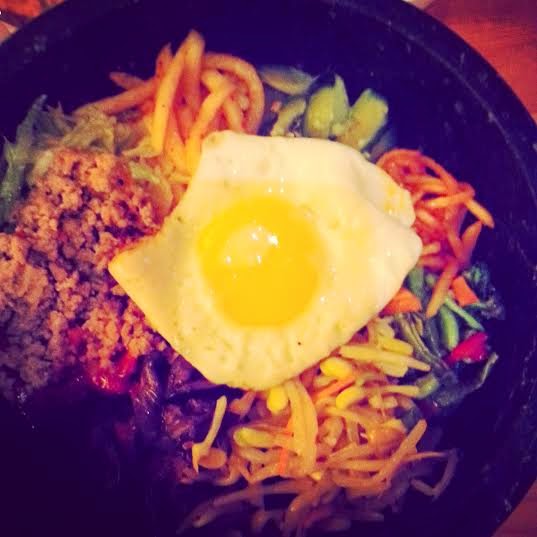 Bibimbap actually means mixed rice, did you know that? Well, I didn't either until about 3 seconds ago :) The egg is kind of supposed to be raw but I was happy with this one; raw egg is a thing I not-so-much appreciate. Traditionally the rice is served with veggies, some meat and chili paste. I had all sorts of goodness in my bowl (which is scalding by the way---which is why I had to blow on my food throughout the meal!). There were some pickled veggies that had just a hint of vinegar and went well with the rice, the meat and the egg and well, everything. There were even some fiddleheads which was quite surprising! A damn nice surprise! They were cooked to perfection. And I ain't used to eating warm cucumber but you know what, it's pretty damn darn tootin' good!

Service was alright: we got water quickly and he came to take our order in a timely fashion. He didn't come check once if we liked our meal or to serve us water so that's -23 points right there. He did, however, bring us hot sauce 3 seconds after asking.


And now, the scores!

If I ever get the bibimbap craving again, I'm going back! Oh, wait, ya, it's here :) You know where to find me!

Marie, the fact that you went back a second time shows that you must have liked it, so this is great. To be honest, the mold would have scared me. I think this is because I worked for a property management firm and I have seen mold in some apartments and knowing how it can make people sick...well.

Getting back to your review, I do love cabbage, and even though I have tried Chinese, Japanese and Thai cuisine, I must admit that although I have heard many wonderful things, I have never tried Korean.

Great review, thanks so much for sharing. :)