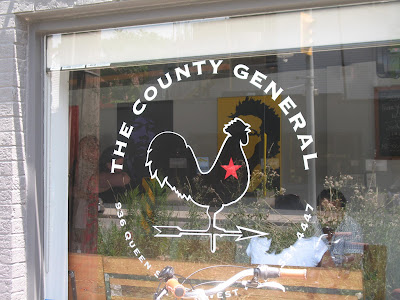 After getting up super early to be at Ontario Place for Sylvia's bf, Morton's triathlon, we needed something to eat that would hit the spot. On the way home, we passed by The County General and thought that perhaps this could be the spot. 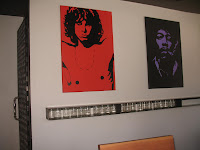 As soon as we got in, we were seated at one of the 5 (or 6) 2 person tables. There are also about 10 seats at the bar and 6 or 7 outside. As luck would have it, they had room for the three of us. Half an hour before we finished our meal, a line started to form. 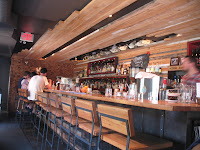 It was quite a modern looking restaurant, with chic lines and lots of wood. The music included 90s classics such as Postal Service and Radiohead. Oh, the memories! It was a great ambiance overall with the music and the chatter around us. Not too loud but loud enough.

They have great drinks so I started with a mimosa which was, well, a mimosa. Nothing special, you know, orange juice and bubbly. Seeing as it was freaking 12$, I would have liked something more...exceptional. No? Isn't 12 bucks a bit steep for a mimosa? On our way to this resto, we saw a place that was advertising 4$ mimosas and 4$ bloody ceasars. Pff. Then I had the bloody ceasar and THAT was dsamn good: a very spicy rim with paprika and other spices and the whole thang just had this incredible taste to it. It was spicy but not too spicy and tasted like celery and loveliness (that's right). Needless to say I really liked it.

Let's get down to the food! Sylvia and I ordered the fried chicken (do you not KNOW me?) and Morton ordered the Croque Madame which was HUGE (well, he burned QUITE a lot of calories this morning so he probably could have eaten two!)! Fried chicken is apparently their specialty. They change the menu a lot but that item never changes. They served this in a milk bun which was soft and airy with an avocado chutney spread. I wouldn't call that a chutney; actually you didn't really taste it until you really looked for it. There was also coriander which added to the mix of flavors in a great way and pickled red onion which completed the sandwich. The onion was great but hey, I'm biased because I'm an onion freak. Now, the chicken. YUM-MY! In Sylvia's words, it was much lighter than she had thought and I agree. It was well seasoned and moist. Just the way you like yo chicken!
Morton had the Croque Madame and for him, the highlight was the pickled tongue. The rest was really good too and filling. Perfect for after a race but maybe a tad too much for a 'normal' person.
Now, you could choose between fries and salad. Sylvia had the salad and in her words, it was not exciting. The fries were good, although some were not crispy enough and they were tiny. Tiny little fries. Kinda hard to dip them into anything without putting your fingers in there. Meh. Speaking of dipping, the plate came with their homemade smoky ketchup, made with hints of cinnamon and paprika. Delicious.

As for the service, it was OK: we got water 2 seconds after sitting down but it took the waitress more than 10 minutes before getting our order. Also, it feels like it took a while before we got our food, but then again, maybe it's because we were so hungry.

I would totally go back. They have interesting ideas and I think it's fun that they change the menu!