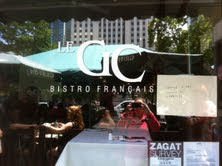 Another lunch date with my dad :) He wanted to go to Le Grand Comptoir and well, I can't really say no... because, well, he's paying :p 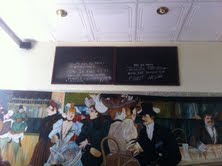 So we get there and since it was scorching hot outside and very pleasantly sunny, the terrace was full to the brim. We had to go sit inside but I think we prefered it because there was air in there---we could actually breathe! It was pretty much like every french bistro so I won't take 8 hours describing the inside. There were about 30 to 40 seats outside and around 60 inside. Ish.

The waiter didn't even look at us when we came in, he was busy taking pictures for a woman at a table. I was flabbergasted. Very annoyed. Therefore, it did not start off really well. At least we got water quickly and he explained to us the plate of the day which was on a chalkboard in front of us.


My dad had the porc and I had the salade niçoise. We both had the soup to start off with. It was soooo nothing special. I coud've made a way better soup at home. It said vegetables in a fish stock... I guess if you really looked for it, you could taste the fish. It was well seasoned though.

I then got my salade niçoise. Meh. It was a shizload of lettuce and ¾ of an egg, a tiny TINY little piece of anchovy, a lot of canned tuna, four capers and some other veggies. There wasn't that much vinaigrette on it so a lot of it felt blend in my mouth. OK, it wasn't THAT bad but it wasn't nearly as good as I'd hoped it would be!

I think this place runs on regulars, mostly. Like my dad.

And now, the scores:

Nothing special. I'm hoping other items on the menu will be better if I go back a second time.