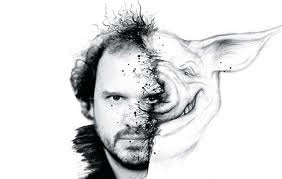 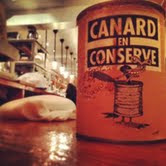 My bro and parents went to this resto and I was NOT there :/ Sad but true and also, well, I have 20$ in my bank account. Not good for Au pied de cochon.

This resto is in the heart of Le Plateau on Duluth right east of St-Denis. The famous chef, Martin Picard, is
sometimes present, sometimes not. This time he was not :(

Ok - I just got off the treadmill - STRAIGHT TO MY THIGHS - should be Picard's national anthem - and that ain't bad- his famed resto has earned quite the rep, and well, when it came time to walk the walk it did just that - leading me right to the aforementioned treadmill. Ok enough rubbish - let's get to the goods.

The place was packed, reservations ahead of time is a safe bet. Then again, it was Friday night. It's tight and
boisterous in there - and that ain't bad We were seated in a pretty awkward come and go spot at first - we
requested to be moved, the hostess kindly obliged and we were relocated to a slightly less busy quarter.

McAuslan brews their "special" Pied de Cochon ale - it's a Frontenac... anyways... order a few of those and start your downward health /ascending moral spiral. Here's what we had to start. Oh - and the service - it's immaculate - Picard has assembled quite the army of observant cats. Your mug is empty - they're on it - tonight's specials - they'll unspool the verbal scroll of recipes before you without blinking/stuttering, no biggie.

Tarte de tomates: Unctuous - buttery - delicate - rich in flavour - flaky crust - nothing but goodness here - it works well as a dish that you split - mowing one of those bad boys to yourself would be a crime against the rest of the menu.

Salade de Bleu, pommes, endives: plentiful - and possibly the greenest dish on offer... we think. Generous
amounts of blue cheese crumbled in a mixture of apples and endives - the whole thing tossed in a most simple delicious dressing.

Paté de campagne: is exactly what it was - taste and texture were pleasant - but when compared to the other 2 entrées - this one takes the bronze - especially when one knows what comes next!

Very tender and generous cut of porc, bone in, cooked just right. As per the above picture, this ain’t a pretty plate – in fact – most dishes don’t come off douchy looking – straight up presentation often overshadowed by the amount of food/sauce on the plate. The dish is accompanied by mushrooms and red cabbage and topped off by a balsamic sauce – in fact a bit too much of it.

There is a “jarret” de cochon under all that sauce, promise. If you’re expecting a traditional pied de cochon – what would seem to be a titular dish at this restaurant, don’t order this one – maybe this take on it: PDC farci au foie gras. They debone the jarret, leaving nothing but meat – lots of it – and it is succulent – too bad the whole thing is covered with so much sauce/mush that it practically drips off the plate.

Can’t say enough good things about this dish. From the moment it’s served to the last bite – this thing will literally send you high heaven… if duck and its byproducts is your bag. The contents of the can – which is opened before your eyes have been canned earlier that day – breast and a nice slab of foie gras along – well seasoned and accompanied by veggies… but really – the whole thing just stews in duck fat… full blown duck fat. It’s super rich and super good. The bed of cauliflower purée on which the contents of the can are poured onto acts as a sort of cleanser between every delicious bite. The duck doesn’t flake like a confit would – it’s a bit tougher than that. The portion is just right given the contents – anymore and you’d probably be this dude.

There is a beautiful wood oven in the restaurant - the kitchen is open – so you can see all the cooks busy at work – toiling over hot skillets and assembling mouthwatering dishes – the vibe is good – they had Arcade Fire and Pierre Lapointe playing in the background. The conversations are loud in plentiful in this joint. The baguettes, baked in house are delicious. Bottom line, it’s everything you’d expect from this place.

And now, the scores:
Food: 9 (could have been 10 but the presentation was lacking)
Service: 9

I’d go back in a heartattack beat. My rents chalk it up to “been there, done that”