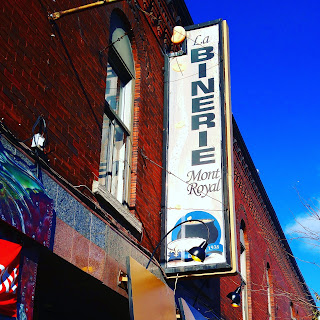 Jer Bear absolutely wanted to go to La Binerie, since, like, the dawn of time. This was me all summer: 'dude, let's wait until it's colder'. Finally, as soon as the temperature hit 0 C, Jer wrote to me and said 'let's go!'. And so, to the binerie we went! 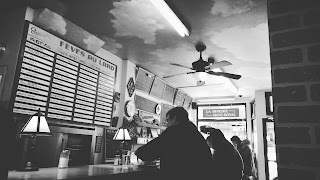 You get inside and man is it ever small. There are people seated at the counter on the right and people at the very small two-person tables on the left. We got the only free spot. This place could not be more traditional, with its rigodon music, and everything old, I swear it was almost like we were dining in les Filles de Caleb. OK, I said 'almost'. But it was seriously like we were going back in time. 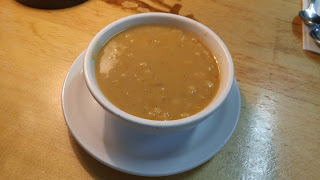 I started with a nice pea soup. Yep, I was planning on farting all day. Oh, by the the way, I need to say 'I'm sorry' to my coworkers. Sooooo sorry. It was hooooot! It had the perfect texture and it had just enough salt to not be tasteless. Trop réconfortant! I got Jer to finish it for one reason only: the farts. 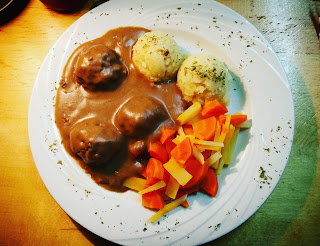 Meatball stew. Ragoût de boulettes. There aren't that many things more Québécois than this, I tells you. Mashed potatoes, veggies  and ragout de boulettes (with lots and lots and LOTS of gravy). The meat was perfectly moist (cringe-damn that word!) and the sauce, although a tad too thick (seriously, I think it was nearing the solid state) had a bit of cinnamon in it which was ubs nice. The potatoes were silky and buttery: just god damn perfect, really. The veggies were kind of an afterthought for me: why would you eat these if you can pig out on meat and gravy? Let's face it, not the most appetizing plate but damn it was it good (and filling).

My main Asian boy said 'jveux juste des fèves au lard'. The man looked at him like, dude, come on. And he then he offered him a piece of tourtière and his eyes lit up. By the way they make some mean beans. With a name like 'La Binerie', they have to, right? And that tourtière. DAMN! I think we both could've handled another piece of that heavenly meat pie. The spices were just right, the crust was perfect, and the meat was spot on. Basically all words that mean the same thing. Hahaha. 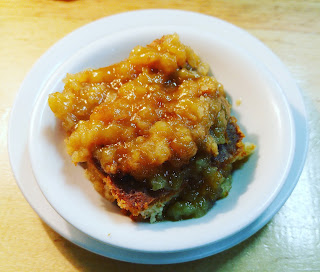 Pouding chomeur. This is a very important part of Québec's culinary history. Very. You find this in all the sugar shacks. Lemme just tell you that if it's not on the menu, it is not a real cabane à sucre. This was, hands down, the best pouding chomeur I've had. Eva. It was ubs sweet, just the way it should be! After all, it's not called pouding minceur, it's called pouding chomeur. get it? Ya, that was stoopid. Right after, the waiter brought us... cream! OK, it was 10% and not 35% (thank the little baby jesus). He said something like 'some people like it on their pudding'. I gave him AND Jer the evil eye and poured it all over. I likes me some cream on everything, yo!

Service was alright. Big smiles, very old school. Very. VERY. He didn't check up on us during the meal and our water was not refilled. But we did get our menu and food in a timely manner. AND, I mean, the cuteness on this old man was overwhelming.

With the amount of farting that came out of this meal, I cannot guarantee I'll go back soon, but I will. Go back.

Again, this doesn't imply you’ll have a assured win, however it's going to improve your probabilities. 4/4 The Curse of the Cash-Out If you’re a die-hard online poker player, you’ve in all probability heard of the cash-out curse. Some gamblers consider that players are “punished” for cashing out, with internet site} rigging their subsequent games against them. There is hardly a player that never thought of means to|tips 메리트카지노 on how to} improve his gameplay and to grant himself a win. Unfortunately, there is no a|there is not any} such a thing like granted win.