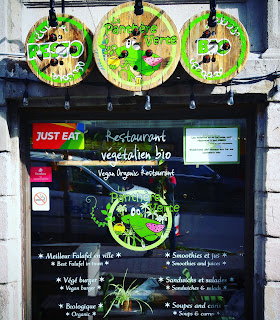 La Panthère Verte is a vegan, environmentally friendly-responsible restaurant. I think they had one on the Plateau about 5 years ago and now, they have 6 locations AND a food truck. I'm just imagining the cells growing when a baby is developing in the womb: multiplying and multiplying. OK, this is a weird and somewhat creepy comparison. I shall stop this at once. All this to say that ma gym boy, Leo, invited me to the one on Mackay, right next to Concordia, where he is the new manager. I'm really liking one of his first decisions as new manager: invite me to eat awesome food. 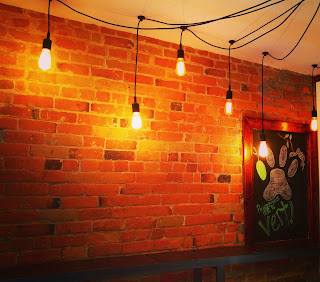 You know how much I like getting invited, right? Of course you do. Hint: I love getting invited. tell all your restaurateur friends. And I THANK YOU. But enough about me. The place itself is very inviting. It seriously feels like you are entering a jungle when you step in: plants everywhere, wood, and more plants! And, by the way, I looked and I didn't find any panthers, which I think is a good thing. OK, that was a bad joke. Hey, if my friend in Egypt can see a jaguar in the front seat of a car, there's always a possibility I can see a panther in a restaurant. Am I right? Anyhoot, there are communal tables at the back and some at the front, including this cute booth right in the window. Yes, you feel like you're in it because you have to climb into it and you have to sit with your legs crossed. I liked the style. Oh, and the music. The music was right on! Actually one of the best I've heard in a restaurant recently. Jolene by Dolly Parton, Lana del Rey, CCR. It faintly reminded me of my friend Lena's awesome mixes in the early 2000s when we were young 20 somethings in the city. Yes, I'm old.

On top of having very cool music, la Panthère Verte is uber environmentally friendly. If I knew a word that meant more than 'uber', I'd put it here. They have a green policy! I shall explain. You bring your container, you get discounts. You don't have one, you pay a small fee for the compostable container. You can also pay a deposit of 1$ for a mason jar and when you bring it back, you get 1$ in your pocket. What I found wow is that La Panthère Verte does not have a garbage. QQQUUUUWHAT? Yep. They either have recycling or compost. You empty yo plate where it needs to go and then you leave it on the shelf. It looked like it was quite well managed: we all know that this kind of procedure is difficult to maintain and that this could easily become very messy. And finally, food is organic and local as much as possible. Basically, this restaurant is quite the model citizen.

Leo wanted me to gain 18 pounds on that day so he brought me almost everything on the menu. I tend to exaggerate, but not THAT much. 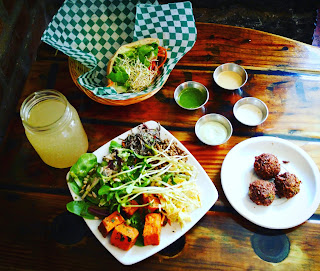 The EVERYTHING: Black bean noodles (VERY interesting!), lentil salad, mesclun (but it was uber fresh, so it was acceptable), white bean salad, coleslaw, sweet potatoes, falafel ballzzz and a falafel sandwich. I told you: he wanted me to gain 18 pounds. Well, I think the dessert was responsible for most of those, but this comes later. Lets begin.

I had the ginger and apple cider drink which was oh-so-fresh and had just the tang I wanted. I'm also a sucker for bubbles. Buuuuubbles! Talk about a refreshing drink!

The black bean noodles, although original, were not my cup-o-tea: they tasted a bit flat and lacked flavor. Wait, that's the same thing. You get it. The lentil salad had this mustard vinaigrette and I absolutely loved the mix! It was a bit on the hot (n' spicy) side, which I love. Y'all know I loves me some heat! The white bean salad had dill in it. If you're starting to know me, you KNOW I ain't a fan. Like, ever. WELL, this was actually nice. Yep, I'm saying it: I liked the dill (don't tell anyone!). It actually made the salad taste fresh and went really well with the beans. The mesclun. Well, it's freaking mesclun! In my book (and you guys know I have the BEST book), mesclun is bad after having it for more than one day. Yes, I'm a tough mesclun consumer. And damn proud of it. Anyhoot, there was a lovely vinaigrette on top of it: very herbal and full-o-flavour! This made the salad, of course. Mesclun never makes the mesclun. OK, I'm getting ridiculous now. The coleslaw was... meh. OK, it was alright, but it was nothing special. The sweet potatoes looked promising but they kind of felt short of delivering. They could've had more flava. They were perfectly cooked though, which was a relief, haha. Nobody likes an undercooked sweet potato.

The falafel. Ah, the falafel. Panthère Verte actually has an award winning falafel. Ya, it's happening. First, it was Marie-Claude Lortie that said that they were the best she had tasted and that she would go back time and time again. If you know who MCL is, you know she is difficult as all hell. All. Hell. And then they were voted best falafel in Montreal many years in a row in the Best of MTL in the magazine Cult MTL. And I'm sure they have some stashed 'Winner of the best falafel' trophies, somewhere. So herbal and full of loveliness. It was perfectly fried, not crumbly and nicely moist. I'm also ready to make it MY fave falafel. Change APPROVED! There was also the falafel sandwich and although it was the same awesomeballs falafel in there, the pita was a bit on the thick side for me. Just a ps, you have the option of having everything in that sandwich, on a plate, without bread. Perfect for peeps watching their carbs :)

The sauces!!! They have many. I just love a good dip, you know? My fave (and Leo's too!) is the Yogi: vegan yogourt with lots of herbs. It was so damn fresh! I also liked the Hippie: maple syrup (nothing can go wrong here), ginger and sesame. As I said, I likes me a good dippin'. 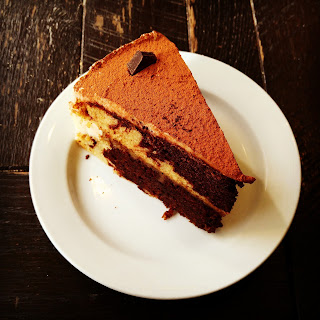 The dessert. Was I still hungry? Hellsss no. Did I NEED dessert? Absolutely not. Did I want it? Well ya. I needed to try it, you know, for the review. Tiramisu. Or Viramisu, because it's vegan. Hehe. This was a huge mother freaking piece. The coffee taste was quite faint, which is good for this non-lover of coffee. The frosting was good and thick but not too overwhelming. It was very moist (ugh, stupid word) and I think a part of it was because of the layer of chestnut cream in the middle.

Service was done by Leo, so it was perfect. He explained everything to me in detail and gave me a drink asap! He even sat with me to tell me more about what I was eating (OK, he was on his lunch break :p).

Leo keeps on telling me that I must try more food on the menu, so, you know what, I might be back sooner than later :)

I am a food lover and that i continually rummage around for new places to eat in. Thanks for giving a suggestion of a eating place.