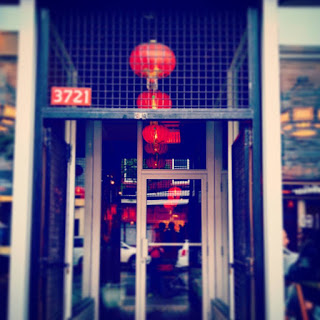 Last week, I partied way too hard. Like, WAY. Ugh. I remember tequila shots. And more tequila shots. It wasn't pretty. This level of drunkeredness (yes, this is an AWESOME made up word) only meant one thing: a huge hangover. No amount of water or tylenol would fix what was to become the winner of all hangovers: a two-day one. Ugh. I needed food. Good food on the cheap side. As I've said before, it seems like most of the restaurants in the South-West are closed on Sunday so Lea and I had to try to find la perle rare as we say in French. Loosely translated, a gem, nay, the holy grail! The winner of this lengthy search was none other than Satay Brothers. 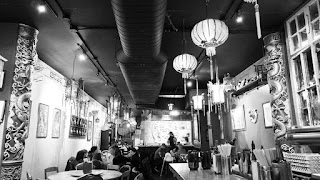 Satay brothers have a stand in the Atwater market during the summer and it's always uber busy. I've eaten there on a warm sunny day and it was delicious. Well, this time, we were going to the actual restaurant on Notre-Dame. Mmmkay, so as soon as you walk in, you find yourself looking right back to the entrance to make sure you're still on Notre-Dame. I compared it with the old Warshaw that used to be on St-Laurent. I remember going in there once with a friend and we had to make sure we were still in Montreal. It's like entering a whole other (Asian) world.

I absolutely LOVED the deco. Lots of lanterns everywhere, dragons (and tigers and bears, oh my!), birdcages hanging right beside the bar, Asian currency taped to a wall. It felt and looked like what I could only describe as an Asian diner. I. Love. It. The place itself, at that time, wasn't that busy but the ambiance was still oh-so-present. Some oldies were playing on the radio and everyone was merry! Well, except me: I was hungover as f*ck.

We wanted to eat everything on the menu. Alas, our stomachs would not have been OK with that choice. We decided to share two different buns (buuuuns!), the Laksa and the Char Kuay Teow. 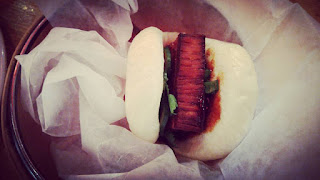 The pork bun, more commonly known as the damn-this-is-effin-good bun. So... this was effin good. First off, that bun resembled the texture of a perfect cloud. Soft, airy, awesome (clouds can be awesome too, you know!). The pork was perfect: juicy, tender, melt-in-your-mouth goodness. The coriander, well, you know where I stand with coriander: I loves me lots of it, ALL the time. This was a hit. 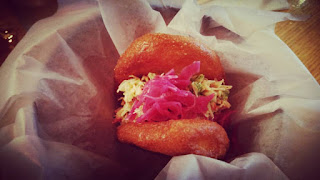 The crab salad bun. Special of the day. We were totes excited about the prospect of crab in a bun but were a tad disappointed. Seriously, you could have told me it was any other kind of seafood and I would not have known the difference. It was a bit watery and the bun, being fried, had kind of lost it's softness and cloudiness. Let's just say I'd pick the pork bun over the crab bun any day of the week. 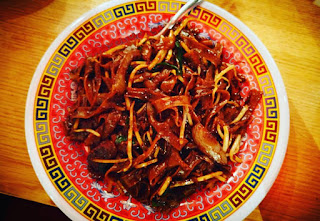 Char Kuay Teow. On the menu, it was written rice noodles but it was definitely egg noodles, the fatter friend of the tiny rice noodle. Let's just say if there was a fight between both noodles, the egg one would win by a landslide. See, these are things I think about daily. (erratum: my token Asian friend, Jer, tells me there are different sizes to rice noodles when I thought it was just the tiny one. So, in this case, the rice might have won over the egg!)When the plate was placed in front of me, my first thought was this: 'oh, now that's brown'. I put the colour aside and discovered a whole new world. It was full of flavor! It tasted like ginger and it tasted like hot peppers. I love that combo! It was multi layered! The Chinese sausage was yummy and moist and all that good stuff. I was just saddened that there were only about 4 pieces of it in the dish. The shrimp were cooked perfectly. I find it so hard to have someone serve me the perfect shrimp and Satay Brothers brought it, brought it good. Green onions brought in another level of flavor and the bean sprouts totes fit in there. All in all, I was genuinely surprised after judging the dish for its brownness or lack of colour if you would. 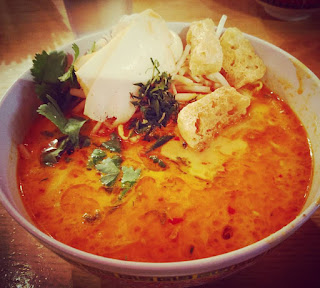 Laksa. Chili shrimp coconut soup. Now THIS is a comforting piece of soup. Piece of soup? Ya, I'm going with that! Coriander was awesome in there and although I didn't like it as much as Lea, it was really tasty and right up my alley. The noodles were way too cooked and started breaking down as soon as they hit my mouth. Or before, which made this a bit hard to eat. The shrimp in there were really on par, but I felt like the whole thing was emanating shrimp. Meh. Not a fan of the emanation. It was spicy, which was really welcomed. I love spiciness that sometimes, I'm ready to cry for it :)

Service was great! First impressions are very important and the manager/owner/bartender/everything dude just said 'join me!' and we were hooked. He was very efficient, as if he'd been born to restaurateurs parents and had lived in a restaurant his whole life. You know, THAT kind of guy. We got our plates fast and water was served as soon as we sat down.

Toootes goin' back and no one will be able to stop me. Warning: I might also go back on my next hangover.