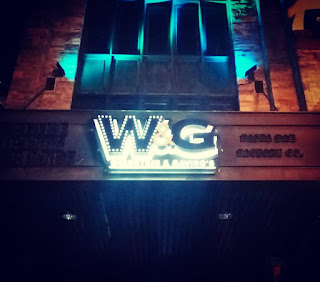 I was invited by Mr. Axler (maaaaan that guy sounds cool) to try W + G since I had never been. I gotta say that going to a huge mofo of a restaurant on a busy street like Crescent is never in my top 5 choices. But when you get invited, things change.

I'd heard good things, OK things and bad things about W + G so i had no clue what to think. Or what was going to be served. Or if anything was going to be edible. All I knew is that in the recent year, they had done a menu overhaul and changed many things for the better. 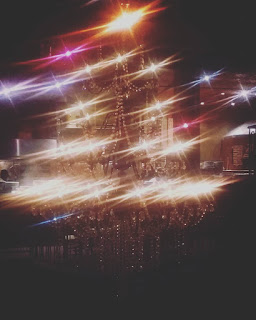 From outside, where there's quite a huge terrasse on the first floor, you can see a hint of the huge interior. When you walk in, it's somethin' else. Holy bejesus and Mary AND Joseph. Dang! So you walk in and there's this huge chandelier. I'm talking huge. HUGE! As in it's bigger than my apartment huge. Well, at least as big as my living room. I kid you not. This, to go along with the size of the restaurant: an employee, who i presume is the maitre d' told us it can sit up to 300 people. THREE hundred! I was just flabbergasted. And obviously, I still am!

Wienstein and Gavinos has a HUUUUGE (notice the 4 'u') wine collection. I'm talking massive like if I'd drink a bottle a day, every day, for the rest of my life, there would be some left. Ya. That big. The ambiance was nice, but that's Crescent. If a resto has a bad ambiance on Crescent, don't touch it with a ten foot pole.

Aight, so we get there, get seated right away after meeting the manager. There's no talk of menu or preferences or allergies even and they just start bringing us food. Hahaha! I mean, I don't really have a preference in general except for mucho lobster (duh!) and I don't got no allergies, so I didn't mind much. But before the food, we got the, according to Mr. Axler, their signature [girlie as all hell] cocktail: the Punch Drunk Love. 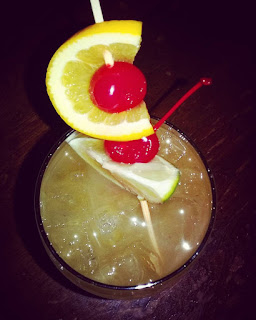 Girlie, right? Well, when you take your first sip and realize that it's a cross between a sex-on-the-beach (the girliest drink to have ever existed) and sangria, you know that you are in oh-so-girlie territory. It was Alyzé, Vodka, and orange juice. It was basically like putting a whole alcoholic peach in your mouth and biting hard. Hahaha! You know what, although it was a tad on the sweet side for me, I did like it.
Bread (in a W + G bag no less) and herb oil. Basil and dried tomatoes. The bread was unfortunately a bit on the dry side AND I didn't really know why they brought us a half baguette. I mean, Aude is so thin that sometimes, if she turns to the side, you can't see her (hihihi, jk!, but seriously) and I, with my AWESOME new body shape and muscles, obviously don't usually eat carbs in the evening. The oil was good and very fragrant but I think we both could have skipped this.
Hamburghini: tiny hamburgers with a beef patty, arugula pesto, roasted garlic aioli and tomato. At the first bite, I discovered the loveliness and awesomeness of the arugula pesto. Wow, that shizzle be goooood! The meat was on the dry side (seriously, what's up with dry meat recently? Is it a thing, because I did not get that memo) but packed with flavours. The aioli was just garlicky enough and fit uber well in there. All in all, one of the best tiny little cute burger I've had. Beats me why they gave us three, but hey, that just meant more burger love.

Tramezzino al salmone: smoked salmon, toasted pumpernickel bread, fig cream cheese, arugula, onion and tomato. The bread was so soft and softer and softest. You get it? The sandwich itself didn't seem like anything that special until I hit the fig cream cheese. Whaaaaat!!! The discovery of the century! What an awesome thing to put in there. It actually went really well with the salmon and complemented the whole sandwich. I kind of fell in love a little bit with that cream cheese. 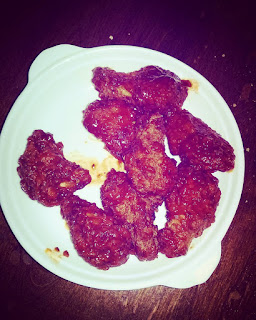 Worst picture ever of the worst presentation ever. BBQ wings, thrown on a plate. In my head, I pictured someone at the end of the kitchen throwing them on a plate that someone else was holding at the other end. Kind of like football, but with my food. My food.

I'm going to use a word I hate here: moist. They were moist. Mmmmmmoist. Ugh, I just puked in my mouth a little bit, that's how much I hate that word. But sometimes, you just gots to use it! We both really liked them. Our hands and mouth were filthy during/after so that is the sign of a good wing. I almost feel like quoting Ace of Base but I won't (the sign... get it? Too young? Argh!). The BBQ sauce was spot on: not too sweet but not too tangy. Just perfect! 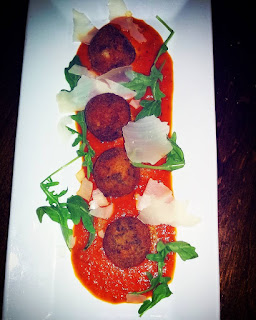 Arancini: fried rice balls with goat cheese and mozzarella, sun-dried tomato and spinach, on an Arrabiatta sauce. I've kind of been there done that with arancini. We made some at work one month and I had my share of it. This is back when I'd eat fried stuff in my every day life. Now I only eat fried stuff in my restaurant life :) It was quite dry and the cheese could not save it. The sauce was very herbal but a bit too acidic. I know, I know, what do I expect, it's a freaking tomato sauce! 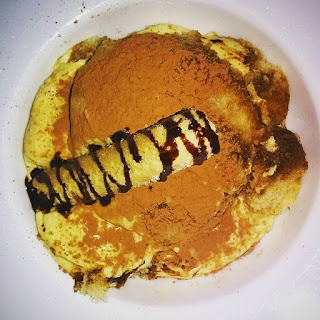 Tiramisu. I totally fell in food love with tiramisu at Café International. This one could have competed against the latter. It was not too caffeinated, which is awesome for me because I tried drinking coffee a couple times and I literally wanted to vomit. All over. Ew. Back to the tiramisu. It was soft and creamy and I wanted about 8 more.
I found it a bit whhheird that they only gave us food from their 'bar menu'. I would have loved to sample their risotto or their fresh pasta! Don't get me wrong, free food is always good, but this is an Italian restaurant and I don't feel like we got the full experience.
Service was awesome throughout the meal. At first, there was a bit of confusion with a young'un: he brought us another table's dishes and took them back as quickly as he had put them on our table. Poor little guy, he seemed so embarrassed. Then we got our 'real' waiter who was charming, professional and very present. He even suggested he help holding our plates up while we were taking pics of the food. See, that's what I want in a waiter; someone who's ready to hold my damn plate. It would have been nice if he had offered to get us other drinks when ours were done but hey, there was enough alcohol in one of those bad boys to give me a 2-day hangover. I kid, I kid!
And now the scores!
Food: 7.5
Service: 9

I'm never on Crescent and usually I make a point of not going there but I sure will tell my Crescent-going friends to hit it up!