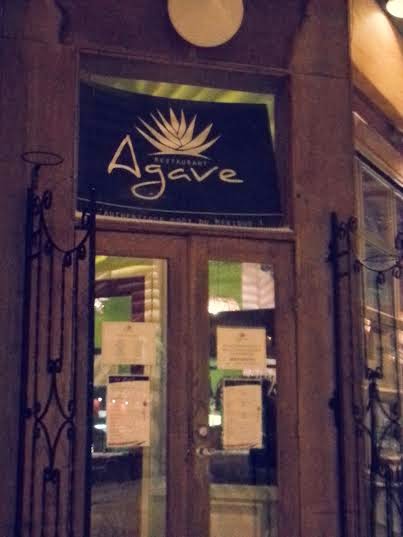 One of my friend's ex just opened this new Mexican restaurant and guess what? I happen to love me some Mexican food. Oh and guess what else...I know some friends who do too. True story. So, this is how, on a very, VERY cold last Sunday, Val, Lea and I decided to head to Laurier Ouest and go to Agave.

We entered and it was completely empty except for one table, but soon enough after that, we were the only ones in there. Duh, it's freaking -30 outside. Sheesh. Anyhoot, we were warmly welcomed by the waitress and chose our table (again, duh). The restaurant itself has high ceilings, about 50 seats and cute hanging lamps. There was something missing though... I don't know...maybe the ceilings were too high? Anyhoot. Music was ok when we got in and then it was happenin'. Maybe it's all the margaritas we drank. Wink wink. 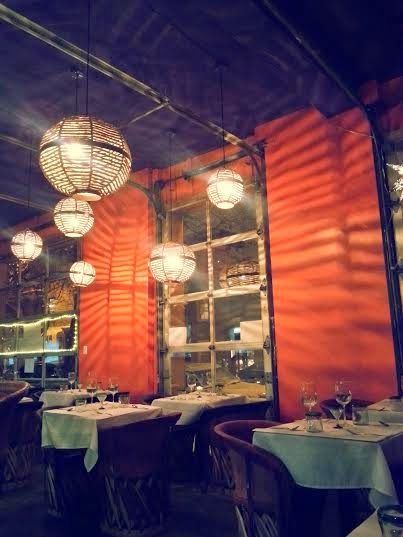 The waitress explained the menu and told us what she liked the most and what was most popular. We shared three entrées (pigs).

But first, ooooobviously we needed drinks. 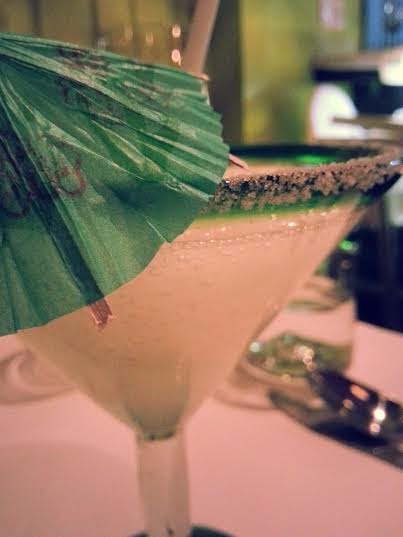 I had meself a nice little margarita (oh, and then another...hum...cough...gotta warm up on those cold winter nights :) ). It was perfect. Hit the spot. So good, lime-y and refreshing. Excellent. You want a good margarita, you go to Agave. As Nike says, Just Do It. 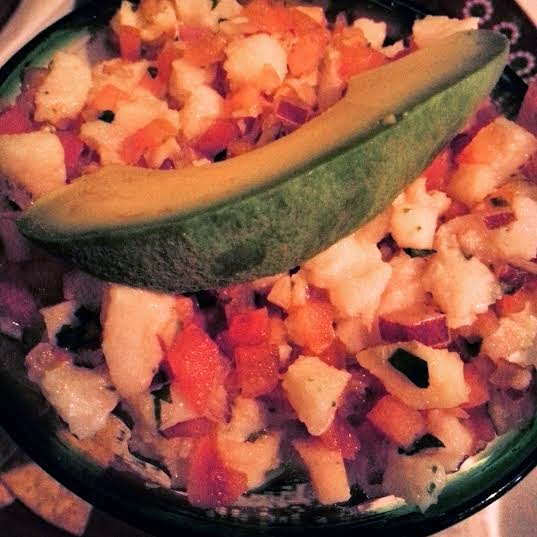 Ceviche: good flavors and nice little pieces for my tiny mouth. At first I wasn't too sure but after the first bite, it hit me; this was good. The onions and the tomatoes brought in extra freshness and the lime made everything that much better. All in all, a hit. Oh and it was a huge portion too! Well worth that 10$. 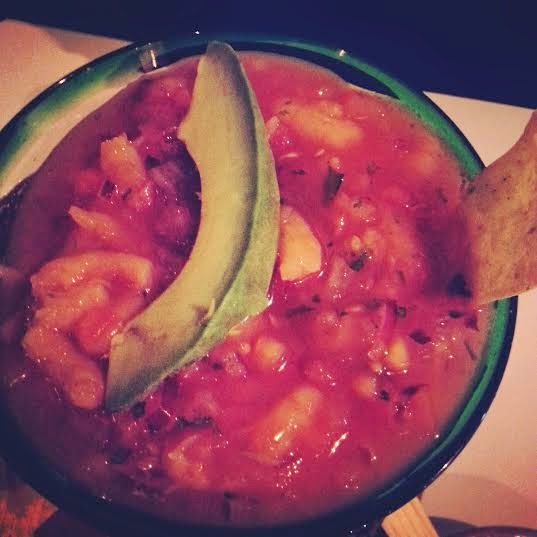 Cocktail de camarones: shrimp, onions, and avocado in tomato and lime juice. This was nice. Very fruity, and well seasoned. Just perfect, really. It actually tasted as if there were strawberries or pineapple in there. Again, huge portion! 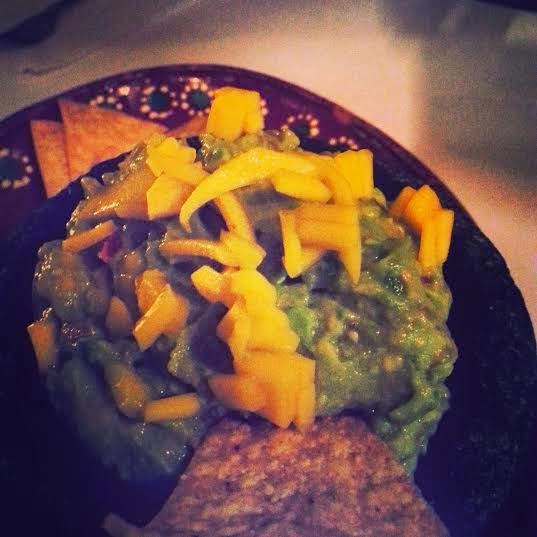 Mango guacamole. Wait. Mango? YES! Guacamole? YES! What do you do? Put 'em together man! The guac was soft and tasty and the mango obviously added some fruitiness but also a nice texture.

Oh I almost forgot! With our entrées, we also had tortillas (what, were we supposed to eat those with our hands? You crazy!) and salsa roja AND salsa verde! My mouth was pretty much on fire. But damn did it ever bring me back to Mexico (ok, I've never been, but it's pretty much like I have). 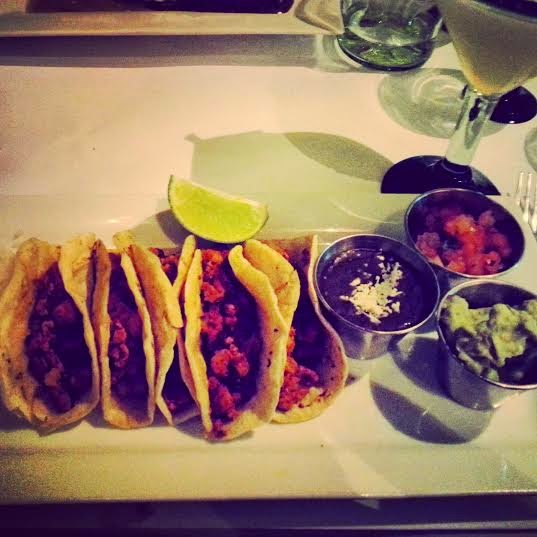 For the main course, I chose tacos el pastor: pork marinaded in pepper and pineapple. This was totally me. I love sweet and savory dishes and this didn't disappoint. The rice (on the left...) was on point, and I know my rice, the pork was really tender and oh-so-tasty, the guacamole was amazing, the pico de gallo was refreshing and went perfectly with the pineapple, the frijoles (black bean puree) was even better than the one my Mexican friend makes (do NOT tell him). Let's just say I was pleased. We were all pleased. AND oh so very full by the end. So full that when the waitress came to ask us if we wanted desert, we looked at her with 'oh-please-don't-tell-us-you-have-deserts' faces. 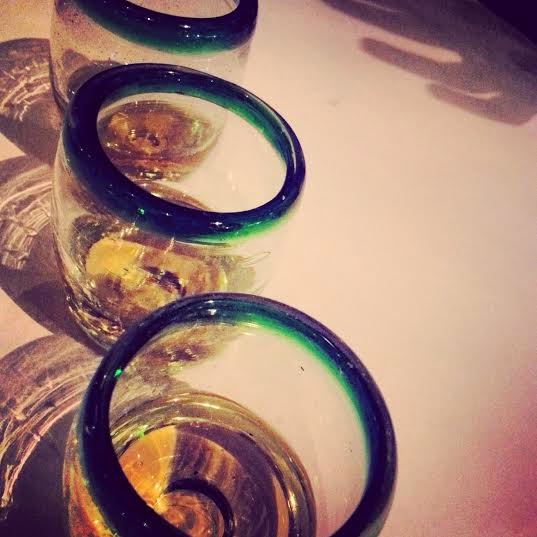 No desert, but a tequila shot? Sure. Ah, I remember my tequila shootin' days. Or... I guess I don't ( I DO remember saying something like 'no more tequila for Marie' many times during parties...while drinking it). But this one was good. I believe it was tequila anejo, which tasted waaaaaaaayyyy better than what I used to drink! Leave it to a restaurant named Agave to have good tequila :)

The service was great throughout the meal. It IS true that we were the only ones in there, but still. Water service was good, she gave us suggestions, she asked if everything was good. I guess if there's one thing I can say it's that at some point it took a tad too long to get food. But a: that's not technically her fault and b: there was only one dude in the kitchen.

This is certainly one of my new favourite Mexican resto in town, so watch out, I'll be back. Margarita anyone?

ps: and to make things even better... they have a we-are-a-new-restaurant 15% discount. dsamn!