I visited Villa Wellington a couple weeks back with ma gurl Bridge, because who isn't hungry after the gym? I had returned a couple weeks before from Cartagena in Colombia and really wanted to have South American cooking again and that lovely taste in ma mouth! And so, we headed to the Peruvian for lunch!

The place itself is lookin' somewhat out of style (ya, I KNOW style): old, wooden tables and chairs and an outdated wall colour. The music was all over the place: Spanish, French, English... dang!

The menu was also all over the place and way too big. Guys, know that a smaller and simpler menu is always better. Always. For yourself, for us AND for the kitchen. I'm gonna quote Nike and say JUST DO IT. 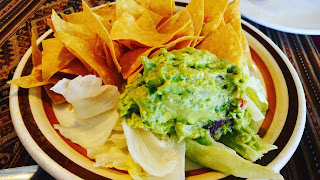 The guac. I'm a BIG sucker for a good guacamole. I love it. Every time it's on the menu, I order it. Every time I have avocados at home, I wanna make some. I just want to eat it all the time. I loved the fact that there were peppers in there, it gave it a good crunch! It was a REAL good guac; the only thing lacking was a bit of salt, we found. Apart from the lack of salt, it was totes up there, flavor AND texture wise. YUM. 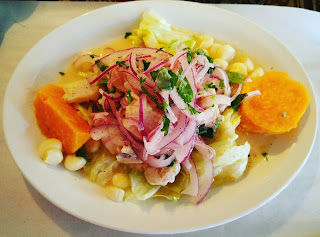 I just HAD to have the ceviche. You have no clue how cray cray my friend Em and I went over a good ceviche when we were in Colombia. I'm serious when I say that if we could've, we would've eaten it 3 meals a day, every damn day. Every. Damn. DAY. It's funny because as soon as I mentioned to our waiter that I had been to Cartagena and that I had absolutely LOVED their ceviche, he quickly stopped smiling and said 'it's not the same'! Dang, competition much? Apart from the sweet potatoes (what the), it really resembled the good cevich (NOT a mistake, say it with assurance) we had in Colombia. The pieces were a tad big, but there were lots of onions, just the way I like it, and it wasn't too sour with the lime. There were also some hot peppers in the mix, which was just lovely and spicy enough! All in all, a great little cevich that ALMOST won over Colombia's :p The bestest and simplest was found at this resto close to our hostel called Tecado. 7$ went a LONG way! We might even go back to Cartagena just for a little bite of that ceviche. Just sayin'.

Service was very quick and efficient. Apart from the tiny bit of attitude I detected when I told him I had just come back from Cartagena, he was quite good at his job :) We also got water rather quickly and he came to ask if our meal was good.

If I do crave ceviche at some point, I'm for sure going to think about going back to Villa Wellington!