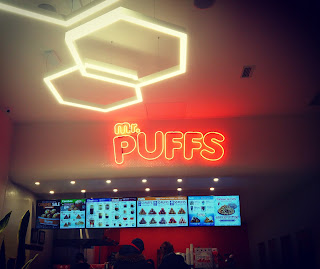 After dinner at La Habanera, Gigi and I were thinking of one thing: dessert! The options were there, but Gigi was really cravin' the egg-free, lactose-free, a-lot-of-things-free Greek donut holes (aka loukoumades). And so, we headed to Mr Puffs on Mont-Royal in the Plateau! 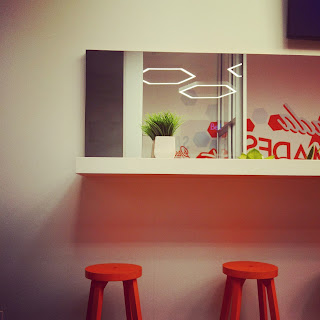 As soon as you walk in, you smell the sugar. The sugar we were oh-so-craving (but, later, would be sick of!). The premise of this place is that you get the donut holes (that are made à la minute) and you choose a topping. We had 12 each, which, in hindsight, seems like overkill AND a bad decision. After this, I actually said this: It was a bad decision. And Gigi said THIS: It wasn't the BEST decision. Hahaha. Truth. 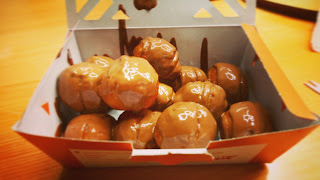 I had the chocolate-hazelnut covered donut holes. They weren't oily at all, but it's not like I wasn't feeling the fact that they were totes deep fried. Deeply. They were soft and lovely and all-o-that, but there was too much chocolate on top. By the by, I NEVER thought I'd be writing these words. Sacrilège! It just became too much. I had to actually force myself to finish them. OK, so, we should've had the 6 donuts+coffee (No, they don't come without the coffee. Yes, I could've ordered those and just said no to the coffee). But what's done was done. It was way too much/heavy for me.

Food: 7. Could've been higher... but then, there's the food death that came afterwards.

I shant go back, I don't think. Unless I get ubs stoned at some point and make the trek to Mont-Royal and Papineau. Scratch that, I'll never go back. I said GOOD DAY!