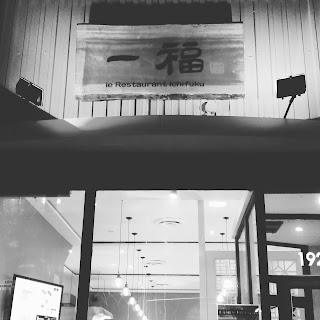 I am continuing my best ramen in Montreal quest!!!! Now, this.. THIS is a quest I like! My Asian persuasion friend Jer and I decided on Ichifuku on Ste-Catherine. We headed there last week with Em and Jadster (short for Jadsteramasterooniepoo, no joke).

Ichifuku is new (not even a year) on Montreal's ramen scene (it's a thing). According to Jer Bear, the resto used to be a Bubble Tea place. Hey, Asian for Asian, am I right? The place itself is quite long but narrow. So narrow that if two people were to hold hands and stretch out, they could totes touch both walls. It is basically pinkish walls and lots of wood: wooden counter, wooden tables, wooden recipients for chop sticks and what have you. There were around 26 seats in the house plus 12 at the counter. The music was all over the place. It was wheeeiiird. One second, we (I) were singing along to the Spice Girls and then Savage Garden came on and I started to cry a bit. Hahaha. Ah, Savage Garden. Bad. BAD Savage Garden! 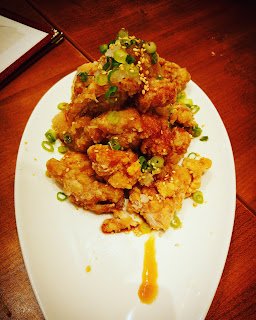 Karaage. OR not karaage. The green onions and the sesame seeds were good but that's about it. The too big pieces were not crunchy and lacked flavour. They were more like wet and flavourless. Meh. 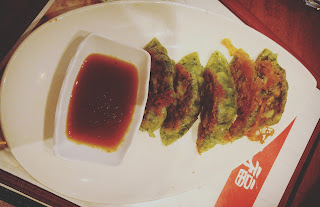 Vegetarian dumplings. After that karaage, I gotta say, I wasn't uber excited for these. But they were yummy. Oh, they were yummy! They were boiled with one fried side. Hey, who said having options isn't nice? The sauce was plummy but had a tad too much vinegar. The dumplings were full of awesome veggie flavour and quite moist indeed! It never gets old, every single time I write that word (m*ist), I flinch a bit. 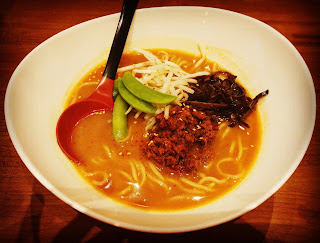 Ichifuku has many kinds of ramen, one more interesting than the other! How exciting!!! I had the tan-tan men: spicy sesame pork (oh GOD yes!) in chicken broth with some snap peas, bean sprouts and tralala mushrooms. Oh, and HOME MADE noodles. Ya boy! That's what I'm talkin' about!!! There's something about home made noodles! This specific ramen originates from Chinese Sichuan cuisine: the minced pork, the chili oil and the spices.

Let's start with the broth. Ah man, that broth! I gots to say, it was close to being the best broth in the quest, but again, Yokato won out. It was nice and thick and oh-so-ooooozing with flavour! The noodles were right on: not overly cooked and not underly (hey, if I say it's a word, it's a word!) cooked either. The pork was just wow. As in I'd wanna eat that pork over and over again until, well, pretty much until the end of time. I mean, it was like the chef had taken the pork and shot it full of spices. With a spice gun, of course. The snap peas and the bean sprouts fit really well in there and added some crunch and some freshness to the dish. The wood ear mushrooms (or kikurage in Japanese---YES, I researched it!) added some earthiness to the ramen. On top of it, they absorbed all that lovely broth! That made them twice as awesome! In hindsight, I should've ordered a boiled egg to go atop the ramen but hey, what are you gonna dso?

Service was aight. I got there and my friends were drinkin' so I already had water and they had ordered the appetizers. It took a while for our waitress to actually take our main course order but, then again, our ramen arrived pretty damn fast after ordering. Our water glasses were always full which is a good thing because sh*t got spicy!

So many ramen restaurants (there's actually another one a couple doors down from Ichifuku), so little time!