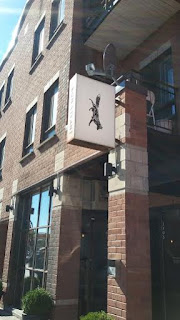 Val and I set out to have brunch a couple weeks back. This turned out to be QUITE the adventure, seeing as she had her dog with her and we wanted to find a terrasse to eat on. Turns out, not that many terrasses open for brunch. Where you can tie up your dog. Or where it's easy to park. Or on the island.

Anyhoot, we finally just dropped off Lola at home after pretty much driving around the city and went to a restaurant very close to our apartments: Le Bon Vivant. I'd been meaning to go there since it opened some months ago. Well, it was time.

It was surprisingly empty-ish when we got there at 10h30---prime brunch time---or is that later? I'm lost because I wake up uber early on weekends to take full advantage of my day. What? I'm old. We were very warmly welcomed by the waiter with a 100 Watt smile (seriously, it was blinding, almost). We were seated right away at the open window and felt like we were pretty much on the sidewalk. People walking by were literally brushing up against us. OK not really. Oldies were playing and then some great classics from the 90's. Basically, music that makes me want to say yay!

We were oh-so-hungry by then so we ordered... drinks! Morning drinks are almost AS good as evening drinks, you know. 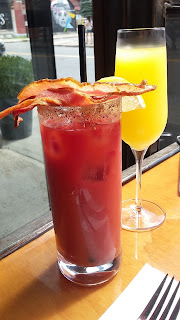 I had the bacon caesar because, well, there's... well... there's the bacon and well, the bacon! Oh and the caesar part. The bacon was crunchy, perfect goodness. Yes, yes, YES! The rest... was so disappointing I felt like returning it (but Val gave me dem eyes) and telling them that tomato juice a caesar does not make. Seriously, it was thick, tomato-y, and straight up unpleasant. Val's mimosa looked about 100% better at that point. I ended up not even finishing my drink. ME! 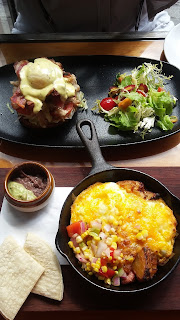 Yes. Oh, AND yes! This was approximately 800% better than the dreaded drink. Val and I shared huevos rancheros and the 'bene' BLT. I mean, come on, look how amazing those dishes look!!! Damn amazing I tells ya! Lets start with the huevos:  fresh corn right off the cob (like, seriously, 2 minutes prior), yummy juicy sausage ,and perfect potatoes that were just a bit spicy (I loves me some spice). The guacamole was as soft as a baby's butt and the bean puree too. Rrrrrrrr, that's me drooling just thinking about it. The only thing was that the eggs were a tad dry. That's seriously the only damn bad thing I could find :) And also, please note how nice the presentation is. A+

The BLT. First off, let me just say that when I saw 'green salad' on the menu, I thought fosho I was gonna have some God forsaken mesclun on my plate. Would you believe that it wasn't? It was a mix, yes, but a good one. F*ck mesclun! Yes, that's how much I hate it. Alright so first off, the open face sandwich was on brioche bread. So already there, that's like 100 points! So soft and yummy. The mayo was nice and tangy, the egg was nice and thick and runny, the bacon was 'fou raide' as Val described it. And everything was hot. Which, as you and I know, is a must. The only thing I could possibly find that was wrong was that it was a bit too salty and the egg could have been cooked 10 seconds less.

Service started off awesome and got a bit less awesome but remained good. Water was ALMOST always in our glasses and service was quick in general.

This restaurant has such a variety of choices (from kimchi to steak to fish n' chips) that I'm just gonna have to go back 8 times. Yes, 8.

Hi Marie, I so look forward to when your posts will once again appear in my news feed on Blogger! I just happened to glance at Facebook today and saw your new post so I trotted on over here. :) It sounds like in spite of the dry egg and the bacon Caesar being disappointing your meal, the presentation and ambiance, and the service was a success! Thanks so much for sharing. :)