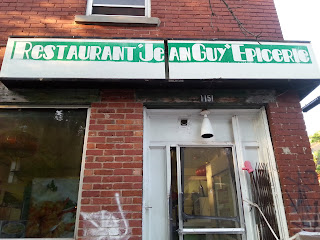 This place had been screaming out for me to try it: located but only two blocks away from my apartment, it was either closed when I wanted to go or opened when I was off to work. Grrr. But one day, miracle! Oh, it was on. It was on like the break o' dawn yo. Ok, getting a bit ghetto here.

The only thing I knew about this place was that it was Asian. Yes, with a name like Épicerie Jean Guy, obviously the name of the dep that was there before it, it seemed really freakin' Asian! When you enter, you actually realize that its real name is Frais Inc. , which, seriously, isn't that much better. And don't even try finding info on the internet... I think there's a little paragraph about this place..on ONE website.

I got in and discovered this wonderful place. Wow. There were 4 seats around a two-booth table with a guy telling me it's so cheap that he eats here at least 4 times a week.... and as I look at the prices, I'm happily surprised to see that its uber (yes, I can use that word) cheap and that the owner doesn't charge taxes. Ok, that's a tad whhhheird. 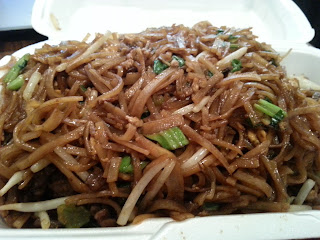 This was 7 dollars. I think I could have fed 2 countries with this portion only. Man. There was a bare minimum of veggies and lots and lots of noodles with lots of soya sauce. I took about 5 bites and then I was full. It was very salty and seriously, I don't even know why they bothered putting veggies in there. 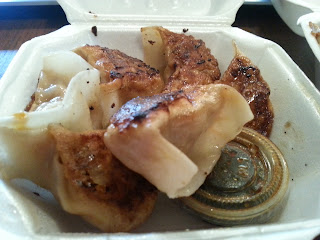 Pork dumplings. The texture was nice and for 2$/6 dumplings, I believe this is called a great deal. They were good, just not great. They had a nice crusty side which was good but what was inside was nothing exceptional (really? you thought it was going to be exceptional at 0.33$ a dumpling?).
Service was...funny. Ya, I think that's the right word for it. Basically, I thanked my lucky stars (ya, I have some, don't you? :p ) that there was a regular there waiting for his order because I would not have gotten any sort of explanation about anythin'. Nothin. Nada! Oh and the cook (the only dude working there) also prepared the guy that got there after me's meal before mine because he was, you guessed it, a regular. You know, I wanted to be annoyed but somehow I doubted it was going to do anything.

Food: 5
Service: a well deserved 4 but in his defense, I don't think he spoke any of the languages I speak (French, English, some Spanish, a tad bit of Russian and a smidge of Italian. Oh, let's not forget my best friend's native tongue, Tigrinya. But, as far as I know, only a handful of people speak it. OK, maybe two handfuls. Aaaand I'm rambling again.)

I really don't think I'm going back there. It was an experience. But not one I'd like to revisit.

He didn't speak French? Oh, no, I hope the OQLF doesn't start with their onslaught on this place, Marie. I wouldn't have liked the noodles, as I don't like anything hot and spicy or too salty! This is the first time I have ever heard the word "epicerie" associated with a restaurant! I have only seen it for grocery stores. Thanks so much for sharing your review. :)

It was quiye a weird place, Linda!

Well, you definitely gave it a go and had an experience, for sure. :)