We rarely go to fish + chips restaurants (well when the wife was in England in the fall she did take advantage of them f + c restos) so we decided on a whim to try one of them after going to see the new Bond movie (ha, you see the theme here?). So we decided to try Brit + Chips near our place on Côte-des-Neiges. There is one downtown which is quite popular and has a 91% on urbanspoon.com. Not too sure this one would get that score.

I say that because well... the place has been opened about 6 months, maybe a bit less, and there is never ANYONE in there. NO ONE. EVER. Who wants to go eat in an empty restaurant? How good can the food actually be if it's empty? THAT's what passers-by will tell themselves. Of course I don't think like that :) I wanna see WHY there's no one in there! And we have our first clue right when we get in. The way the restaurant is laid out, at the front, there are single chairs at a counter. Obvisouly you won't eat there if you're not alone. It's just badely laid out. They must lose a ton of customers because of that! Makes me sad. I feel a tear a-commin'. Also, it is not well located. Just before Pacini on Côte-des-Neiges, it's kind of in a 'hole': on the first floor of an apartment building, it's kind of weird and well, there are people south of it and north of it but not many pass BY. 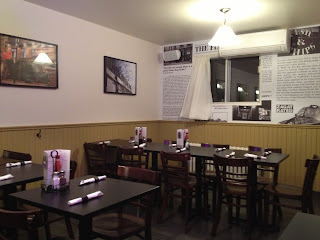 As the restaurant is layed out, there are about 25 [noticeably very empty] seats up front and about 70 at the back. There were 4 clients in the resto when we got there. 4. And it was prime dinner time too. This is not starting off well.Anyhoot, the lack of clients aside, something reaked. I mean really reaked. What was it? Well what do you think can smell so bad in a fish and chip restaurant? Frying oil of course. Bah. I swear, the next day, after having a shower, I still smelled like that damn oil.Apart from that god awful smell, the place seemed really nice, brand new moldings, counters, etc... all in white and beige with frames on the wall of, you know, british stuff :p The music started off nice but then we started wondering why, you know, as somewhat of a theme, they were not playing english music. There was french music, popular music, but no english music. Weird. I mean whhheird.

We were starving when we got there, therefore very eager to eat! I guess that's the good thing about there not having very many clients: service is quick! Our waiter was very friendly and peppy. We read the menu, and decided on a couple things that we were to share. Luck would have it that half the things we wanted (pasties and pies) were not 'available' because they make them in the morning and when they're out, they're out. FUN! We ordered the cod with burgundy batter (a beer batter, very popular in fish and chips' native England) and the haddock with maple syrup batter, mushy peas and as a starter, we had the curry fish cake. We also had a glass of white wine each. 7$. Full to the brim. TO...THE...BRIM. I mean it wasn't the best wine, but not the worst either.

Since we were 4 in the resto, the food came very quickly, so 2 minutes later, we had our first course. Our 'nibble' was good (curry fish cake) but I must say that it DOES say 'cakes' on the menu and there was only one :( It was very nice and tasty and well curried (oh, and hot, which was nice!:) Accompanied with a nice little mayo and a slice of lemon with a great batter that was quite crunchy and satisfying indeed. The cake itself was a bit smooshy (such a technical term!) but still very enjoyable.


Now for the main course, I was not so keen on the mushy peas. They just didn't taste very good. They didn't have mint in them like they do in England and frankly, didn't have much taste. As for the fish, we couldn't really tell the difference between the maple syrup and the burgundy batter. Maybe one was SLIGHTLY sweeter but that's it. Both fish were moist and well cooked but not seasoned enough. I also found that there was a tad too much batter on both but I guess that's why it's called fried fish. I also found it a tad too greasy for my taste again, I am aware it was deep fried...). The fish came with a lovely tartar sauce (it was quite lovely indeed!) and some lemon of course. For a couple bucks more, you can take the chips (fries) with your fish so we did for one plate. Meh, the fries were ok but nothing to write home about. A bit disappointing seeing as they are supposed to be half of what people come to this restaurant for.

As for the desert, well... we just HAD to try their 'deep fried whatever', a deep fried chocolate bar! I've heard about this a lot and never had I tried it SO.... we had the choice between a deep fried O'Henry, Bounty, Reese, Sneakers and 3 Musketeers so we took the latter.It was OK. Weird but OK. The batter could have been crispier. Apart from that, not much to say... I mean it's probably one of the piggiest (!) thing I've ever eaten. Leaving the restaurant we actually uttered the words 'je vais exploser'. When we got home, I think we stayed on the couch for an hour  before we could move again.in.

The service began really nicely and then we didn't see our waiter for a while. He didn't even check up on us to see if the meal was to our liking. Uncool. I'm just asking you to at least be in the room, you know? Sheesh!

OK experience but from what I've read, the downtown Brit + Chips should be better.