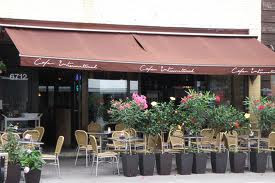 We had been meaning to go there for a while and since we were walking around dans la petite Italie à la fin de l'été, we thought we should go for it! Nous nous sommes assises dehors sur la petite terasse, entourée de jardinières et de petits arbres, créant l'illusion que l'on était pas vraiment sur le trottoir! :) Nous étions entourées de gens d'affaires, en grande majorité, surtout d'italiens bien sûr! C'était drôle, I don't know if it's because I watched the Sopranos the night before but most of them looked like they were part of the mafia, speaking to each other very quietly and holding locked briefcases. But that's probably just me!

Our waitress came to our table and she was so cute and cheerful, it made us smile! She explained the menu and the table d'hôte and came back 2 minutes later with a last minute addition to the table d'hôte: a roquette, fig and caramelized onions pizza. Hello! I jumped on that :p

So this is what I had and it came with a salad (maudite mesclun!) and canollis! Ze wife had the mushroom risotto: pleurotes, potobello, huile de trufle. My pizza was really REALLY good: tasty and not overly full of crap. S 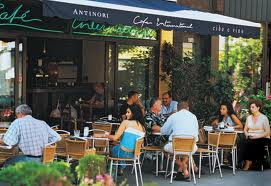 o good that I made some in the weeks following our visit to the restaurant. Only shitty thing was that my caramelized onions were not caramelized at all... just cooked in a pan. That was kind of a let down. I also want to mention that the bread was excellent and fluffy, extremement moelleux, just you want out of bread :) We also had some bruschetta as an entree (she brought soup at first but we were like 'giiirl, we ordered the bruschetta!) It was very well seasoned and had celery in it which was a good addition. The salad was nothing special, I hate getting mesclun in a restaurant, I don't know why but I just do. The great vinaigrette made up for it though. Ze wife's risotto was very creamy and savory and again well seasoned. And she knows her risotto! We always make some at home and this one was really good! My canollis were good but pretty hard... like too hard for canollis. Since the wife has better teeth than me, she ate most of my desert. For the prices: risotto and entree cost 17$ and my table d'hôte cost 16$. Quite reasonable.

We had great service from the start and then the waitress kind of stopped coming. We wanted water and then the bill because we were kind of in a hurry and she was nowhere to be seen! Minus 5 points! She finally passed by our table and we had to stop her and ask her for the bill.

All in all, we were quite satisfied of our Italian experience and so if you happen to walk by in little Italy, you should definitely eat there!