Two posts in ONE day!? y'all are lucky! hehe.

So, the wife had been craving a tuna burger forever so we decided to go tonight! We had gone once this summer and ate the tuna burger and we ate the same damn thing today and I gotta say, it was AS good, if not better than last time! You know how sometimes, you overhype what you're about to eat? well, this was hypin' well deserved! I wasn't disappointed one bit!

We arrived at 6 ish (old ladies eat early!--hehe) and there 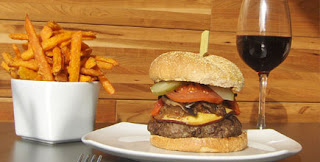 was already a great ambiance. The restaurant wasn't full but it was quite busy. Our waiter arrived only 1 minute after WE arrived and gave us menus and water. We both wanted the tuna burger (mmmmmtuna brgr!). You can actually choose what you put IN your burger, what KIND of burger you want, AND the BREAD that you prefer. I took it with whole wheat bread and mango and cucumber salsa (oh ya!) and ze wife took hers wrapped in lettuce with some caramelized onions.

Mine was...B-U-tiful... but ze wife's... the lettuce was hard to manage while eating and the plate was kind of sloppy. AND they had forgotten the onions at first so the waiter had to bring it back (but it only took 1 minute).

The waiter was nice but not overly so...he didn't look like he was 'into' it and mmmI dunno, he was kind of blah. I like a waiter that's courteous, excited about his job (although not overly so) and knows the menu. This one appeared to know the menu well, although we didn't need any explanations, but as I mentioned, he was a bit 'blah'...Let's just say there was nothing exciting about him.

Prices were quite reasonable : tuna burger was 15,95$ and the extra topping was 2 bucks. Drinks, which we didn't have this time around, were around 10 bucks each, 40 dollars-ish a pitcher. You can check out the full menu at the link posted along with this blog entry...

We definitely recommend this restaurant AND the tuna burger...but we haven't really had anything else on the menu so I can only speak for the LOVELY YUMMY tuna burger! Next time we go: kobe beef burger (19,95$)!